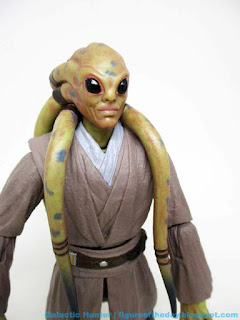 Bio: As a part of a Jedi rescue mission to Geonosis, Nautolan Jedi Knight Kit Fisto fought Separatis droids and saw the first shots fired in the Clone Wars.   (Taken from the figure's packaging.) 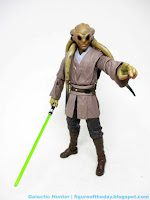 Commentary: This Kit Fisto figure is OK.  It's also off in the way a lot of first draft, half-baked figures were, sharing tooling with an existing Obi-Wan Kenobi so his costume is largely wrong, the boots are wrong, and even the lightsaber is wrong.   I can understand sharing Jedi robes because most fans won't scrutinize it - but the lightsaber?   Hasbro made an amazing FX Kit Fisto lightsaber, so I can't imagine how they got this one wrong.  (Other than they picked one of the 4 Grievous lightsabers... and it was the wrong one.)   They got it right in 2002, so why is it wrong now? 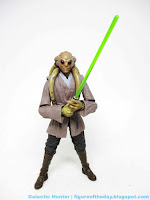 Hasbro did a good job with a half-baked Kit Fisto. The colors are spot-on, and if you saw a small or blurry picture you wouldn't realize some layers of the robe are missing, or that the belt is wrong, or that the boots are wrong.  Had Hasbro thrown in cloth Jedi robes, you might never have noticed.  It's a decent figure with typical Jedi articulation, it stands, it can hold a lightsaber, but the only new parts are the head and hands - everything else is leftover Kenobi shared parts.   If this figure were cheaper or Hasbro were doing low-price repaints for lower-demand figures I could see the need for shortcuts, but The Black Series is supposed to be the most authentic figures we can get - and this is what I would expect from an A+ custom figure.  The head is good (if slightly off in color), and the hands are perfectly nice.

If you just want a Kit Fisto on your shelf, it's fine.  If you want the best one, know that there's a green skin color variant.  You might want to chase that one down - or wait and see if Hasbro does a full upgrade, with robes, or a new costume, or a lightsaber hook on the belt, or the right lightsaber.   I have no problems with the overall quality here, so I absolutely appreciate the head sculpt and the tooling shortcuts that saved a few bucks.  I'd rather they just charged us more and did it right the first time.  (Or did it with a bonus smiling head, and charged us more.)

Email ThisBlogThis!Share to TwitterShare to FacebookShare to Pinterest
Labels: Attack of the Clones, Jedi Knights, Kit Fisto, Revenge of the Sith, The Black Series 6-Inch