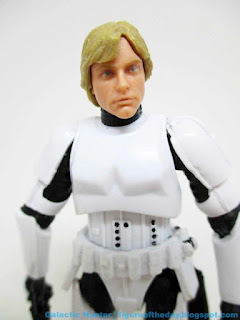 Bio: Aboard the Death Star, Luke Skywalker, disguised as a Stormtrooper, staged a rescue mission alongside Han Solo to save Princess Leia Organa from Darth Vader.   (Taken from Hasbro marketing materials.) 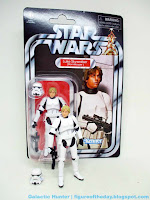 Commentary: I had the 2019 release of Luke Skywalker (Stormtrooper) on my desk for a year, but wanted to wait for the rumored-to-be-coming single-card version before reviewing it to see if there was a difference. And indeed there is - and it's minor.   Other than the SKU and date markings, the butt of the blaster is painted silver on the single-carded release - it is not decorated like that in the 3-pack.

This figure is an updating (using new parts) of existing old figures (which also used new parts,) but none of which was a wholly new figure.  It's new enough - this is another one of Hasbro's improved head figures.   The legs are similar to The Vintage Collection Sandtrooper (also the Dewback pack-in Sandtrooper from 2009).  The head is new.  The belt is similar to the TK-421 figure from Kmart - remember Kmart?  They're still open, despite the fact there's not one anywhere near you anymore.   But I digress.  The helmet and head seem to be new for this release, and that's what's the most interesting about this one. 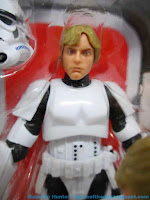 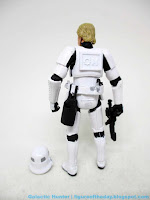 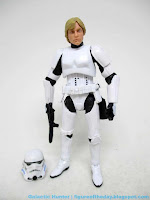 The Luke Skywalker portrait is a huge improvement of figures like the 2009 Luke Skywalker (Stormtrooper) [FOTD #1,277] which was no slouch at the time.    This 2020 release is a huge improvement over that, and while it boasts one of the best Luke heads and Stormtrooper helmets yet the body is very 11 years ago.    The proportions and deco on the not-rubbery helmet are sure to please even the grouchiest fan with a look that fixes the problems with so many previous releases.  It probably won't be the final one, but it's so good you'll want more just like it.

Underneath is Luke's head, which has a separately molded hair piece which is pretty much perfect.  The hairline looks great, and having a plastic toupee on a peanut-sized head fixes a lot of the recurring paint problems we've seen at this scale.  The face printing is also excellent, but the eyes on the 2020 sample look a bit better than the 2019 3-pack one.   the figure has a blaster that's a tight squeeze in the holster, plus a belt clip for the commlink that you're no longer able to remove - so no chance of losing that. 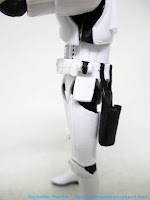 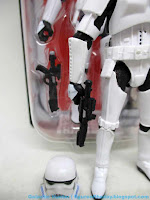 On a card, it's the best-looking Stormtrooper Luke to date with a photo similar to the 1984 The Power of the Force figure which was one of the very last I tracked down when collecting in the 1980s (and early 1990s).   Had Hasbro given him bend-and-swivel wrists and some sort of thigh-cut joints I'd probably say this is as good as Stormtrooper Luke could ever get... but after last year's amazing Rogue One trooper body, I'd be lying if I said there was no room for improvement.   Still, it's better than any other Stormtrooper Luke figures in this size to date - and arguably 6-inch too - so I'd say get it if you have the means.   You can put it in that Death Star Hasbro playset that we'll never, ever get.