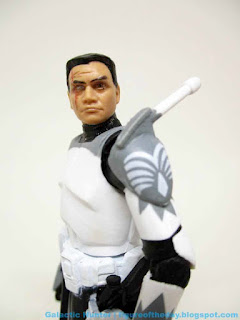 Bio: Clone Commander Wolffe served under General Plo Koon in the Clone Wars as a commander of the tight-knight unit known as Wolfpack.   (Taken from Hasbro marketing materials.) 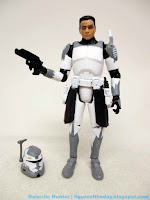 Commentary: At first glance I wasn't sure if Clone Commander Wolffe was any good or not - I'd say it's pretty darned good.   The legs and kama and arms have been used before, you might've seen these as parts on Commanders Fox or Doom or the other The Vintage Collection and The Black Series 3 3/4-inch releases you bought and forgot about over the past decade.   The helmet is new, the head is new, and it looks like the torso is new too - the head and neck have one of those "barbell" connectors allowing additional range of motion.   This means he looks a lot like your other Clone commanders, but what you might not like is that the figure doesn't enjoy any enhanced hip articulation.  It's the standard swivel-forward joints that we've had since the 1990s, without the lateral movement or thigh cuts to which you've become accustomed.  Since the figure has a plastic kama it's not like it matters, those legs aren't moving anyway.

One of the problems with this figure - indeed, with all super-articulated 3 3/4-inch figures - is that it's hard to find a good center of gravity when posing the figure on a shelf or desk.  It'll shift a tiny bit and topple over, seemingly with a mind of his own.   The extra articulation is nice, but it doesn't do anything in the service of your getting the most out of this one - the leg can't really swing forward too well, and the ankles don't do much other than get in the way of keeping him upright.   Holding blasters in his small hands is a challenge, mostly because the Rex-ish blasters are big and Wolffe's hands are rather small.   If you're just having him stand around with the guns in the holsters, you won't notice a problem. 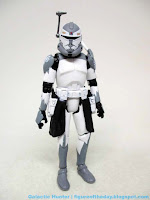 The newly-sculpted elements are where Wolffe shines.   You can see Hasbro came a long way with an incredible facial expression, expressing some element of doubt and disdain with a crooked half-smile and a scarred eye.  There's a lot of weariness on the relatively young Clone, but the hair is totally black and the skin seems a smidgen lighter than I would have expected.  It's good for showing off an exceptional amount of sculpted detail, and directly beneath the neck is a new collar that is just a tiny bit imperfect - it looks like he's been wearing it for a while.  The armor is completely clean, which is a pity but it's not like it looks bad.  I'd rather the deco go to making the head look as good as it does.

The last new element is a new helmet with a pivoting rangefinder.  It's tough to get moving at first, so be careful but rest assured it is indeed articulated.  The grey plastic is rubbery and slathered in white paint, looking just like the TV show.  Plus or minus a few liberties to make it "real," of course.  It fits on the peanut-sized head perfectly, making it the perfect cap on an old figure body.  Hasbro is getting a lot of mileage by making new, next-level heads for its 6-inch and 3 3/4-inch figure lines, giving fans an excuse to rebuy a figure from a few years ago or pick up a release for the very first time.  I'd love to see more figures with this bump in head quality, but it wouldn't hurt to see the same love and attention given to the Clone body - after all, you can re-sell everybody again once that happens.  Recommended!