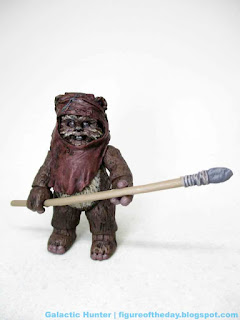 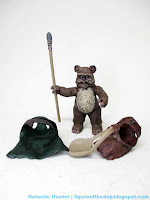 Commentary: I am unsure what prompted the reissue of Wicket the Ewok.  When the pre-order was announced last year he wasn't prohibitively expensive... but he has shot up since then. Despite a much cheaper new release.   The 2010 release of Wicket [FOTD #1,622] was a whopping ten years ago, and while this one does seem to have largely different paint masks it didn't take advantage of what kind of fun you could have with a rerelease and new deco - but it's still one of the great Ewok figures.

What made the 2010 release so impressive was the alternate hood and pouch, colored in season 2 Ewoks cartoon colors.   Hasbro has largely ignored the 1980s television projects when it comes to action figures, with a literal handful of releases based on the likes of the Holiday Special (OK that's the 1970s), Ewok telefilms, and the Ewoks & Droids cartoons.  You can bet that I was thrilled to see that green hood, which looks pretty much exactly the same in 2020.   If I didn't have it next to the original, I wouldn't know there was a difference.  If I had my druthers they'd have done it in the cartoon season 1 tan color - it'd really set this figure apart while making the original release unique and special, and obviously a different figure. 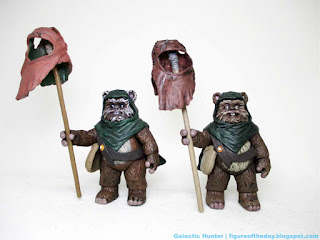 The brown hood is quite different - the 2010 version was lighter, and closer to the photo and movie.  It was also molded in green and painted brown back then.  The 2020 version appears to be molded in brown, which means it feels thinner and it's a bit more flexible.  But it's not true to the movie - so why make the change?  It fits just fine, and Wicket can look around and tilt his head in this good. 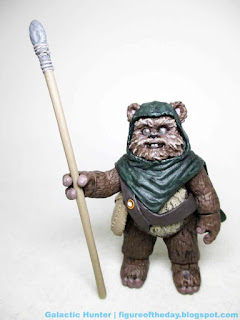 The satchel is pretty much the same with more pronounced stitching.  It just pops more.  The spear is a bit different with the string wrap now painted a much darker color, and the wood lighter and less glossy.

Wicket himself has a lot of changes - he still has 15 joints, but the deco is a lot different.  The toes and fingers are a lighter brown, the belly paint is a little more splotchy, and the face has a lot of minor changes. The eyes are entirely different with brown shiny paint and a more subtle brushing of light fur around the face.  Is it better? Well, it's different - it's not closer to the movie look.   It appears a lot brighter on film, and the original Kenner figure from 1984 may have gotten both Wicket and his hood the best overall.

As it is I wouldn't necessarily say you need to get this Wicket unless you want a second one, so one can be in the green cartoon hood and another can be in the brown movie hood.  The other changes aren't too significant, but more importantly, it's been 10 years.  If you missed this figure for $10 10 years ago, you can get it for $13 now.   Unless you hate Ewoks, and if you do, we can't be friends.  I'd recommend this figure if you need a spare or missed it the first time, but if you're happy with your current Wicket you don't have to worry too much about missing this one.