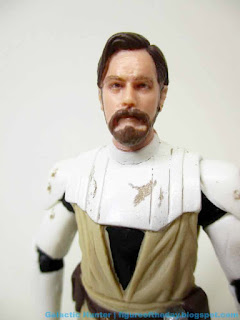 Bio: Obi-Wan Kenobi was a Force-sensitive human male, legendary Jedi Master, and member of the Jedi High Council during the Fall of the Republic. (Stolen from Wookieepedia. There is no bio.) 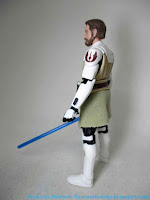 Commentary: I think this was made to tie in to the finale of The Clone Wars and/or The Bad Batch.  This Obi-Wan Kenobi gives you a realistic interpretation of the 2008 TV costume - a neat outfit, to be sure.   Previously released in 2012, this new version changes the coloring a bit and tweaks the eyes.  Without a side-by-side comparison, I doubt you'd know the difference.  To fans seeking the new release, look for a "4+" in a grey circle in the top-left of the cardback, also the SKU "E9577" up there.

In most respects it's the same figure as the original release - that means standard hip joints swing forward, no thigh cuts, no bend-and-swivel wrists.  The standard for super-articulation in 2008 was applied here, and at best it's fine.   It's not impressive, but it's a lot cheaper than getting the original.    The main reason to buy it is because you prefer the changed deco, but most of the smudges are in the same places in on the armor.   The original 2012 release was a lighter, almost oranger brown and the new one has more desaturated markings.  The main tell is the eyes - the 2012 version are the standard bright clear blue peepers, while the 2020 release has the "hyper real" printing and, I gotta say, it's not an improvement.  At certain angles, in certain light, the 2020 one does look really good - but the 2012 version just seems generally clearer. 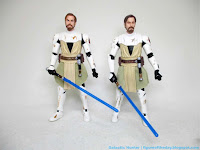 The gold on the belt pops more with the new release, and the lightsabers are pretty much the same - you get a gorgeous blue blade and a nicely painted hilt which plugs in his belt hole.   It's a good figure, and a decent substitute for the original if you missed it before.   I'm a big fan of standardization - I don't necessarily care what that standard is, so if Hasbro says "we're doing all animated!" or "all real!" or "all 6-inch!", whatever it is, at this point, I welcome.  We're kind of all over the place right now, and that makes it hard to put together a legit collection.  A lot of The Clone Wars Clones and a few Jedi made it to the "realistic" 3 3/4-inch collections, but it's a little frustrating that some are "real only" and some are "toon only."  And don't get me started on disparate scales.

Hasbro did a great job with this one 8 years ago and the improvements here are minor... or not really improvements.   But getting this one for less than the increasingly obscene going rate of those Vintage guys is a joy, so take advantage while you can.

Definitely a good looking figure. Obi-Wan is a favorite character of mine and I like all his iterations of action figure fun. Great post.