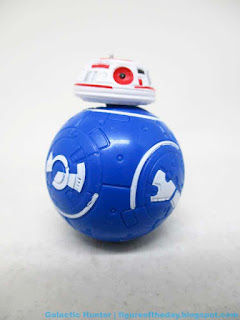 Commentary: This nameless BB-9-style BB Unit is a gem.  The body looks like blueprints, the head looks like R5-D4 - it's clean, and it looks like an accident!   You might recognize the mold from the twice-released BB-9E [FOTD #2,446] which first premiered in The Last Jedi and, as far as I know, doesn't appear anywhere else yet.  Since the packaging has it as part of Galaxy's Edge, which seems to be a large collection of elements, who am I to argue? 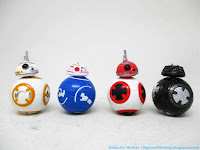 This pack swaps up the head and body - so you get a blue BB-8 body and a white BB-9 head here, giving it slightly different construction consistent with the "droid factory" ethos you may have seen at a theme park bin.   I appreciate the move for more variety.   The only moving part is the head and neck, making this a three-piece construction with a "barbell" between the head and body.  The round body has a flat base, but Hasbro's droids were never weighted like the Weeble-esque Disney figures.  It's good, but not as robust as the theme park tooling.  Given that it's cheaper - and for now, easier to get - maybe you should just happily gobble these little guys up while you still can.  This wave of 3 two-packs is the biggest BB expansion in the history of this style of droid.   Before now, each movie got a couple of droids tops - The Last Jedi introduced a grand total of three new on-screen figures via the Disney and Hasbro toolings.

I would argue these guys are probably worth the money - BB droids were previously used mostly as accessories.  You get one or two full-size figures with a BB (or two) before, so two for $10 is certainly reasonable.  Hasbro and Star Wars don't typically do a lot of bright colors, so it's a nice change of pace to see something like this - it's different, it's fun, and it seems right at home in your dioramas.