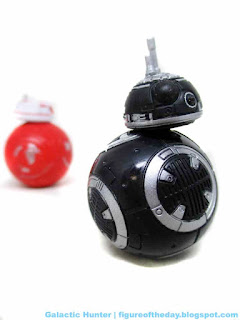 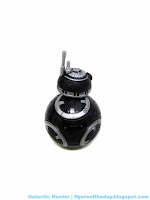 Commentary: This BB Unit is your obligatory black repaint. If you collect toys, you know of this and maybe you've even got a shelf of black Scourge/Nemesis Primes, black Cobra Commanders, black Stormtroopers, black astromechs, black Clone Troopers, black Wolverine, and it's my understanding that sometimes they even make black Batman figures now. As a sub-category it's kind of cool - I used to have a black toy shelf in a bookcase before I moved away to work at Entertainment Earth forever ago, and still haven't put those back up.

The pattern is usually some level of taking a red (or white, or blue, or green) toy and wanting to paint it black. It's something that works - they sell, people like them, and they tend to look cool. Sure it's a cash grab, but when the thing you're collecting is an evil clone or an in-universe mass-produced consumer good like a droid, it just plain makes sense. The black absorbs a lot of detail, but the silver on BB just pops - the panels have a lot of lovely paint, and the antenna looks swell.

The head is cute - but that's a pro and a con. BB-8's head can't not look cute in these colors. There's nothing menacing about it, it looks like the adorable round beeping robot just had a goth phase where it's still just as adorable as always. Maybe if the eye was red it could look more menacing, but that big black eye just reads as permanently cute. Blame Funko for popularizing them. The body doesn't look wildly different from BB-9E, but the added silver does pop nicely.

Overall I'd say this was a great program with 9 worthwhile droids - even if some looked alike in weird ways. Disney put out a few of its own BB units in various colors, some of which Hasbro has yet to touch, so there's plenty of room to grow and make new colors with these robot bodies. I hope they do so - and I'd recommend getting this set if you can still find it for ten bucks.