Star Wars Figure of the Day: Day 2,739: Imperial Stormtrooper (The Mandalorian/Rogue One, The Black Series 6-Inch) 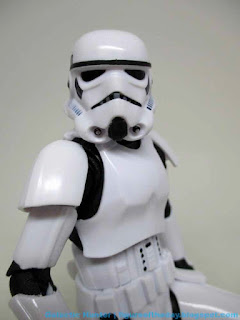 Bio: Stormtroopers are elite shock troops fanatically loyal to the Empire and impossible to sway from the Imperial cause. They wear imposing white armor, which offers a wide range of survival equipment. (Taken from Hasbro marketing materials.) 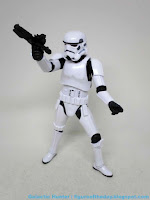 Commentary: The origin of this Imperial Stormtrooper is tough to nail down - early documents indicated it was from Rogue One, and the box says it's from The Mandalorian - which didn't have a lot of pristine white troopers in it. It also had a number of 501st Legion members bringing their own armor to the sets - which is notable as that would crack open the door for lots of variation in those dioramas you're building out. This particular 2020 trooper is an all-new mold with flourishes clearly designating it from the Disney-era. Between this figure and Dagobah Luke, Hasbro is spoiling us with their skill - and everything that came before is starting to look a little less awesome with the improvements rolled out 2020. 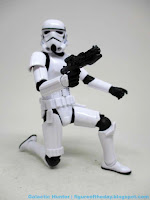 Since we got a Sandtrooper (and subsequent Stormtrooper) in this line dating way back to 2016, it's kind of funny to see how these lines evolved over time. In 1978, the Stormtroopers didn't have necks or waist joints - we got those in 1995. Swivel biceps and knee joints were added in 1999, so by the time we got the 2013 6-inch line with its nearly 30 points of articulation it seemed we probably maximized what Hasbro could do. In some ways, that's very true - the new 2020 figure doesn't have as many joints. Hasbro really upped the ante with the range of motion, so now the new elbows and knees have almost the same range of movement as double-jointed limbs from 7 years ago. Considering the weaker range of movement on the First Order Stormtrooper elbows being barely able to bend 90 degrees, it's an engineering (and no doubt budgeting) miracle. 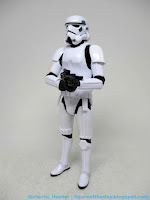 It's glossier than its predecessors with proportions that may or may not be more accurate - the chest armor is now a vest and it seems just a tiny bit off. The shoulder armor hangs off a rotating piece in the shoulders, allowing for increased movement but probably increased breakage over time. We got a different belt design, lacking the dot "buckle" up front and the holster. It's clearly the same Stormtrooper you've always loved, but just a little different. Even the helmet is tweaked a bit. It has a lot in common with the 3 3/4-inch Rogue One trooper.

The figure seems to have a greater range of motion despite an increase in joints no doubt thanks to smarter cuts around each moving part. The joints aren't as ratchety as previous figures, meaning you can get a smoother experience when coming up with poses. You don't have to worry about the ankles clicking in place just off-balance enough that the figure flops over. He just stands.

The helmet details are changed a bit, with the eyes and mouth appearing just a bit different than before. It seems the eyes may be wider apart, and the mouth is just a smidgen off from the original films. Of more interest, though, the grenade/detonator on the back is recolored a bit and cuts in the white armor seem to expose more of the body glove. This is kind of neat, as it's ridged and not the plain smooth black we usually get. 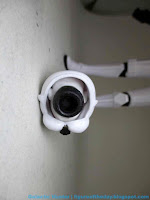 Where this figure shines best is how Hasbro hid all the joints. They made a fuss of removing pins in Marvel Legends at Toy Fair 2020 but made no such mention with Star Wars, which sometimes has a lot of visible eyesores and sometimes doesn't. That's where this figure really impresses. If you pick up the 2013 trooper design, you'll see gaps between the shoulders and the body, or sets of pins in the arms and legs. The belt is a bit too big, as opposed to the 2020 version where almost all articulation is on the black body glove and you can't see any pins. Not a one. Rather than using the same old pin joints we've seen on bigger figures for years, Hasbro adapted the super-articulated 3 3/4-inch joint style which just plain looks and works better in this scale. It's like a little tiny suit replica, minus the lack of dark, dark green lenses in the helmet. They're just very glossy black this time, but I'll take glossy.

I do notice some pinching in the soft plastic, particularly in the shoulders. I don't know if this means this plastic is more prone to warping and distortion over time or not, but it's something to look for - it seems to correspond with where the packaging clips on to the figure. It's not cradled as gently as it should be given the materials, and hopefully we'll see the packaging altered for future runs so this won't be an issue. 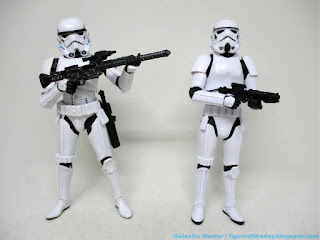 With rising costs and weirdness in toy production overseas, you only get one blaster - but that's all you really need here. Perhaps weapons packs or deluxe troopers will follow, but this is the one you're going to want to troop build. Hopefully Hasbro continues running them for years to come, as it can stand and sit without a fuss. If there were more vehicles this would be very exciting, but it's nice to see figures future-proofed should a massive Troop Transport or some sort of Imperial tank ever get produced. (It won't, don't get your hopes up.) If you're not a troop fanatic and are happy with your existing army, don't worry - you'll be fine. But if you want to see Hasbro make tons of corrections to previous trooper mistakes, this is $20 (or $40, or $600) well spent.