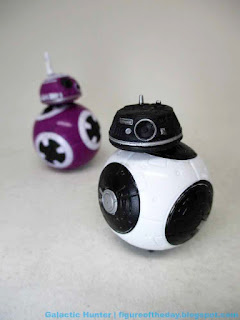 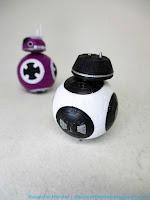 Commentary: This BB Unit is the Moira Rose/Tim Burton/1930s Disney edition  in black and white.  It has the same basic nuts and bolts as the other BBs, but looks a bit more like a soccer ball.  The head is very similar to BB-9E.  This new one has a bit more silver on the head and none of the red or blue, but seems to be more striking thanks to the extra metallic paint.  Even the antenna are painted!  Details seem a little less sharp, but things are basically all in the same places.

The body deco is unique.  There's a white plastic ball with black circles and unique silver markings inside, making it look almost like a whole new droid body. (But not head.  You've seen heads like this.)   Like the others, the ball is flat on the bottom and it won't roll of your desk or shelf without a good push.  That's pretty much all you can ask for.

While not amazing or vibrant, it totally looks like something that could be rolling around in Maz' castle on Takodana.   Perhaps the droid is pals with Bazine Netal, which should be a figure and isn't yet.  (Hasbro really nailed most of The Force Awakens, didn't they?)  I'm thrilled Hasbro got to put out new color droids instead of more of the same, so if you're into that too you can maybe still find these sets.  Somehow.  I feel for you future eBay and Amazon people thanks to the lack of names on the boxes, one of my big pet peeves is naming toys or toy lines in such a way where they may be impossible to easily track down on eBay.  One of my holiest of molies is a 6-inch Solo: A Star Wars Story Han Solo in the little yellow box - I have no idea if it came out in the USA, and may never find out.  (I also need to get the Rise of Skywalker-era ones, but I digress.)