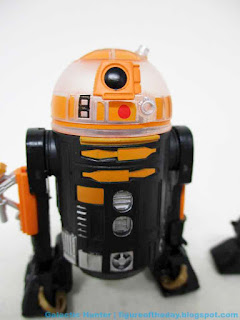 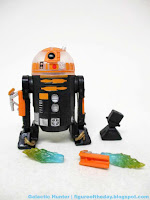 Commentary: This nameless R3-series Astromech Droid is cool, but I'm going to call it R3-E2.  Why?  It's an R3 series, and its SKU is E9932 - so that seems as good of a thing as any.  The Halloween-colored droid is a gem, and the first one I cracked open.  As far as I can tell it's not based on anything specific, it just looks cool.  It's part of a massive program of a Galaxy's Edge-themed store-within-a-store at Target, which I assume was in the works for months and now that there's no theme park to go to, is just a little weird.   Many of these products are unique to Target, but are in park-esque packaging.  These droids are exclusive to Target for the time being at least.

The figure seems to be a generic R2-D2 mold cast in new colors - the dome is clear and a little frosted, with orange panels, a blck eye, and some other highlights.   The body is back with orange panels.  You get clip-on rockets with a blue-to-orange fade optional flame piece.  There's a third leg - but most importantly, the right and left legs have wires on them. 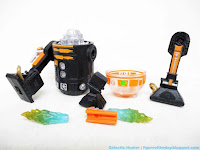 Articulation is 2008 droid standard - the main 2 legs have ankle tilts, all 3 feet have rolling wheels, the head swivels, and the arms swivel.   There's nothing on this droid in terms of how the panels are painted that you haven't seen before.   It's a new colorway so it's good if you don't have enough droids in your life.  And really, who does? 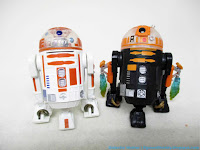 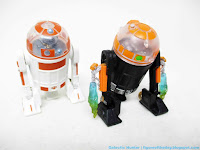 What really bugs me - or rather, confirms a suspicion - is the pricing.  It's ten bucks for a "super articulated" droid mold - previously we've been charged $7.99 for these in The Last Jedi line and sometimes $12.99 in The Vintage Collection, basically whatever they feel like - now it's $10.  Nothing new has been added or taken away, it's basically just whatever they want to charge for the same product based on the week. With ultra-generic boxes, I hope this means that there's consideration as to how to make and distribute droids from here on out - if it's a success.  I could see these being ignored by collectors now and difficult to find on eBay later due to their lack of an on-pack name.

The main reason to buy this droid is because you like it.  If it's rolling in the theme park I may never know, if it's a background droid I haven't spied it yet.  Right now it exists to take away $10 from you.