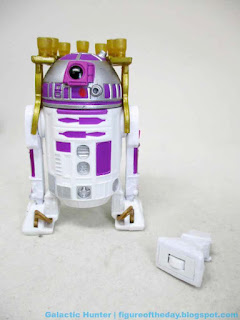 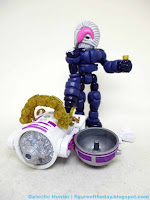 Commentary: Yet another non-named R2 Series Astromech Droid in a deco that's familiar, but doesn't actually exist in another format. While there are purple droid bodies, this particular layout is unique. I believe this shade of purple hasn't been used on another droid either - plus this may well be the only time Hasbro has sold a white body droid with a silver-and-purple dome.

What makes this droid particularly interesting is that it's another in a short list of bartender droids - so far, there have only been a few. R2-C2 (twice,) R2-D2 (also twice,) and a nameless red and white "Jabba's Batender" are all that we've seen so far - they don't have too many places to go given the limited number of playsets, but hey - at least this one can go anywhere your imagination wants. The gold tray is very much like the other trays, and the amber drinks are also very much like the other glasses. I would've loved to see something different, but maybe we will next time.

The mold is very much like the other build-a-droid molds we've had since 2008. It's good! Sure, there have been smaller non-build-a-droid molds since then, but this is the gold standard that serves as the basis for virtually every astromech from Hasbro (and Disney!) for over a decade. The middle leg pops off, all three feet have wheels, the head turns, and the outer ankles move a bit. It does what you would expect just as well as a prop from the movie.

What makes it interesting are the colors, and also the story it doesn't quite tell. There's no backstory behind the purple drink droid that I can find, but at least it's notable for being a unique shade of purple with a layout we don't see a lot. Under the two tool panels under the head are a couple of purple boxes that are usually left blank. The back of the figure is also largely left blank.

I had to go through my droid stash to confirm it - which means there's a lot of similarity out there - but this configuration is new, and there's no silver with purple dome in the previous decades of droids. 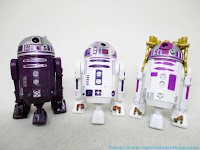