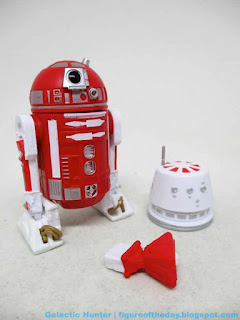 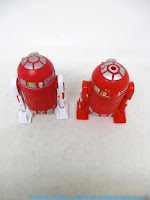 Commentary: This is a hard droid to classify.   It's an R2 Series Astromech Droid in the box with an optional R5 head... so let's go with that.   The body looks a little familiar, because the color was used by the early Disney droids for the theme park bins that also used the Hasbro-era legs with foot cables.   I pulled out a red bodied droid and it's a very close match, if a bit brighter than this new one.  For hardcore droid completists, you have droids like this - but it's different.   It's also the same basic build-a-droid molds we've been getting since 2008.

While not essential, it's neat - it's a nod to what you could've built in a Disney bin dump since 2012, but cheaper, and at least at first easier to get.  So why should you, the droid fanatic, get this? Well, if you don't have a red dome droid, that's one reason - "red with silver panels" is so far exclusive to Disney parks in the bins and also this set.   It's a tiny bit different than the Disney model.  Disney has a hole in the head.  Hasbro has a red projector-adjacent light, Disney has yellow. Hasbro has a green dot set in the back of the dome in a silver panel, while Disney's is yellow surrounded by unpainted red.  Hasbro has a few silver painted panels that Disney left blank.   There are a few other tweaks - but someone going through a bin of parts should see an obvious few differences here. 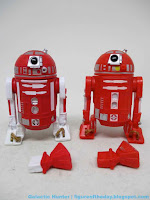 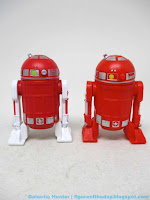 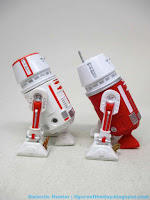 The R5 dome is, at first glance, very similar to the Disney R5 domes and Hasbro's various R5-D4 and R5-D8 - but it's not!  The big differences are obvious when you put them side-by-side, because this new Hasbro 2020 R5 dome is mostly blank white without the red pinstriping.  It also has an antenna, which Disney droids are missing. The 2020 nameless Hasbro droid's red is also a bit redder, as opposed to having a hint of orange on Disney and Hasbro's previous releases.   So from where I sit, it's different in a big way - moreso than the R2 dome.

The body seems to be unique - but it does resemble R5-X2 or R2-R9 a little bit this one has distinctive vertical white panels painted on the front - plus white legs, and a real design oddity. You may disagree but I find the red foot incredibly distracting.  It's painted - molded in white - so it was a decision that someone decided was worth paying to do.  It looks like he's wearing mismatched shoes - I don't get why they decided this was the "correct" look for this as it seems an accident happened.  But hey, you get articulated outer feet and a removable third leg - and you can swap these limbs with other droids if you want.  It can be fixed. 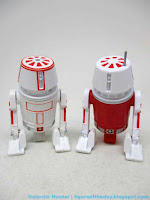 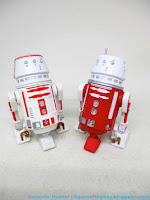 I'd say get it because it's different and weird - but there are more astromech droids in the modern line than there were total figures in Kenner's original vintage tenure.  Maybe you've got enough.  If you haven't had your fill, what's one more?