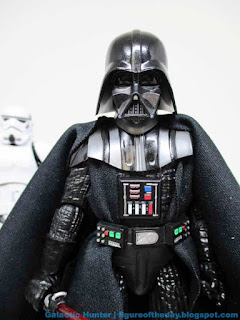 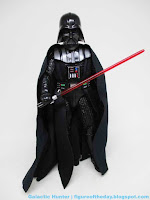 Commentary: This Darth Vader seems to exist to show just how much Hasbro has come in a few years. The first 6-inch Hasbro Vader came out in 2014, and since then we've had a few revisions. It was a good figure - but the costume was a little baggier in spots, and the helmet wasn't as good - but it did have a chain for the cape, which is now gone. In terms of proportion and articulation, this figure is a huge improvement with a mix of new and old parts - you may recognize elements from the 2017 40th Anniversary Collection releases, which improved deco considerably as the production run went.

As far as I can tell the legs and upper arms are the same as that Rogue One/Star Wars: A New Hope release. The torso has a balll joint now, and the helmet seems new - the deco is new, at least, with shiny black lenses rather than red ones. The helmet also has dark grey/silver highlights painted on it, which is something licensed products very rarely include - and fans quite often miss, myself included. The glossy elements are much cleaner than some previous releases, and while the soft goods aren't perfect they're weightier and look great. It feels like you're getting a richer product here, even though there's not a lot of new articulation and the ratcheting elbows aren't as smooth as other new releases. The double-jointed knees from the old figures remain, as does the old item number in the sole of the boot. But you won't notice. That's the power of draped cloth. 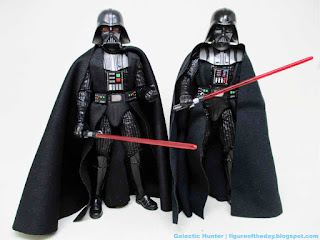 The chest armor pops nicely, just shiny enough over a chest console that seems newly-tooled. The coins lots don't look quite as much like coin slots, but there's some nice color here and it's not overwhelming. The lightsaber belt hook remains, hidden under the thick cloth cape. In many respects it seems Hasbro took lessons from the quality of the $80 8-inch "Hyper Real" figure, giving the general look and feel of the figure in a $20 form. I don't know why you might want that $80 figure unless it's your only figure - this one just feels amazing without the weird, rubbery limbs. Real joints feel and look great, and it has an imposing silhouette too.

When I saw this figure was coming, I didn't realize just how much better it would look or feel - now that I compared it to the other Vaders, it's clearly the best one so far. You might not feel you need another one, but if you don't have any get this one in either its 40th Anniversary retro packaging or its The Black Series 01 line look. It's good - and maybe there will be a better one in a few years - but right now it's pretty gosh darn amazing. I wish the ankles were a bit stiffer and the hands were a little less stuff, but these things are clearly still an evolving product.