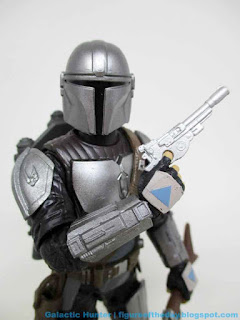 Bio: His body shielded by beskar armor, his face hidden behind a T-visored ask, and his past wrapped in mystery. No one is quite sure who this well-equipped stranger is. (Taken from the packaging.) 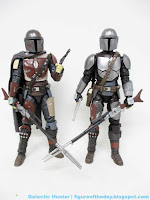 Commentary: This The Mandalorian is, like many figures in the wave, a retool. Last year's figure has been upgraded with a small number of new parts - there's a new jetpack, a new torso, new forearms, new shoulder armor... and paint. Lots of paint. The thigh guards seem to be pretty similar, with the left one being replaced and the right one seeming the same - but with more silver damage.

Articulation is largely unchanged, and the previous version was fine. Other figures had slightly better range of motion in the elbows, and Mando could really benefit from more motion due to his weapons and the action-packed nature of the streaming show. He still stands well, and there have been a couple of improvements - the arms seem to move a little more smoothly, and the hole in the back for mounting the rifle is a little less tight, no longer scraping off paint. That's a huge plus. 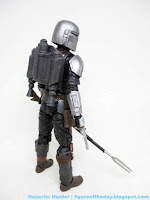 The pistol is shinier, with brighter silver paint and a lighter brown grip. The rifle is similarly brighter, although not significantly so. His cape is the same tool, but more grey - the last one was more brown. 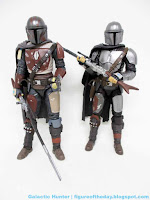 This figure gives you a bit more, with the jet pack being the main new upgrade along with the retooled torso, which has a hole so you can mount it. Getting the cape off the figure is difficult, as the head in the helmet is incredibly tightly joined the body, so when I popped off the helmet it took the neck element along with it. I would say this amounts to excessive force, but at least you can get it on there. Once the cape is removed, the backpack fits perfectly through the use of three pegs and three slots on the figures back, with another slot in the bandolier getting sandwiched in the middle like some sort of meat puzzle sandwich. It's snug, and the form fit is right on the money. Hasbro did a good job here. 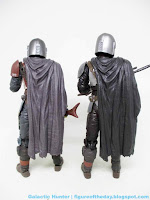 They seem to have skipped the meat of the first season's shiny new armor, which is easily distinguished my a lack of a mudhorn signet on the shoulder. That dates this 2020 figure as season finale/new season look, but that might be ideal depending on how long they keep this particular look on the show. It wouldn't surprise me to see constant changes over the run of the series, since Hasbro and Lucasfilm have shown that Boba Fett deco variants do extraordinarily well whenever they're introduced as toys. Demand for Mando hasn't been close to getting met yet, so hopefully this one will help people fill the void of a Mandalorian figure - and if the rumors are true, maybe there will be one with more swappable parts so fans can customize their preferred version. For now I can say that this is a very good figure, but if Hasbro could improve the range of motion or maybe give us shinier armor you'd have ample reason to buy yet another version of this character. For now, the new armor and jetpack are probably enough to warrant buying this one, even if you have the previous release.

If everything is sized the same as it was on the original (94) Mando, the cape actually just fits over the top of the head without having to pop the head off. :)