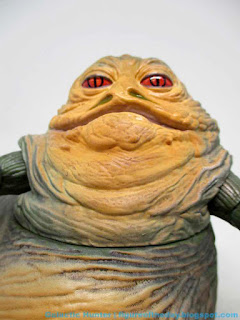 JABBA THE HUTT Barge Redeco
The Vintage Collection Sail Barge Pack-In
Item No.: No. E2596
Manufacturer: Hasbro
Number: n/a
Includes: Barge, Yak Face, cannons
Action Feature: n/a
Retail: $499.99
Availability: March 2019
Appearances: Return of the Jedi
Bio: Jabba Desilijic Tiure, more commonly referred to as Jabba the Hutt or simply Jabba, and formally styled as His Excellency Jabba Desilijic Tiure of Nal Hutta, Eminence of Tatooine, was a Hutt gangster and crime lord, as well as a member of the Grand Hutt Council, who operated and led a criminal empire from his palace on the Outer Rim world of Tatooine. (Taken from Wookieepedia.) 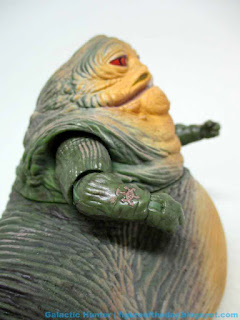 Commentary: Over the years there have been a bunch of Jabba the Hutt figures of varying levels of quality - but none of them are great. The 1983 Kenner one has less color and no drool, but has wonderful glassy eyes and a fun tail/head mechanism. I'm also very fond of The Clone Wars Jabba! Jabba Glob from Episode I is neat, the 2004 Saga Jabba had this nifty railing accessory, and the 2010 Jabba from Walmart ain't bad either - but now is extruding an oily residue and it's gross. Go check yours. I'll wait. (Bring a wet towel.)

This 2019 Jabba was packed in the Sail Barge, but it's a redeco of the 2015 Toys R Us exclusive one in the "Jabba's Rancor Pit" set. The deco on both of these isn't great. The nose and eyes of the 2015 version were off, and the drool looked bad. The 2019 version has a lot of great skin detail, but the eyes - I do not like the eyes. It's like someone traced them with a Sharpie. Bad eyes can give any figure a failing grade, and these aren't up to snuff - but if you can fix them somehow, it's still a great Jabba.

He has his tattoo/brand on his arm, the hands are bend-and-swivel, the head turns, and he can hold the microphone in the Barge. The arms move well in the folds of his neck, hiding the joints relatively well - the designers did a great job here. I love his sassy rubber face and how he can gesture pretty much any way I want. It's a pity he can't eat things, as his mouth is a harder material and can't flex open, but it's still very very good. 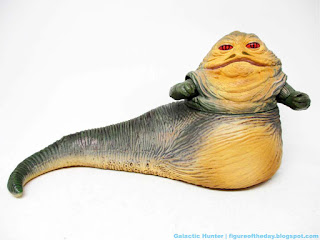 I invite Hasbro to re-release him with improved eyes, a throne, and Salacious Crumb one more time. I bet it'd sell in a Vintage box, and I'd happily buy another one if it was really improved. (Or if you want to bring back glassy 1983-style eyes, that's good too.) The magnificence of the sculpting and the paint work bring out his scar, his wrinkles, his weird octopus suction cups on his tail. There's no reason to reinvent the wheel here - Hasbro and their freelancers can do excellent work, it's just the factory came up short in the eye department and you're left with something that's maddeningly close to perfection - and something more fans will want. Have you seen the prices on that 3 3/4-inch scale The Black Series Rancor Pit set these days? 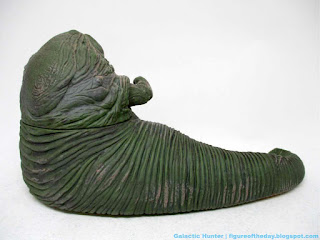 Confidential to everyone: one of my favorite scenes in The Clone Wars was seeing the Grand Hutt Council. More Hutts, please.

Collector's Notes: I got mine from HasLab.