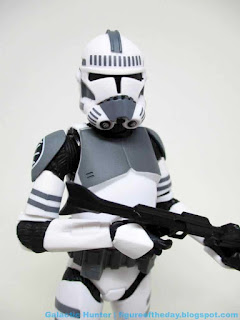 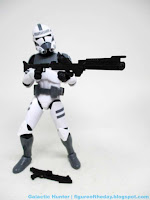 Commentary: Before I opened the Clone Trooper (Kamino) I didn't realize it was an all-new sculpt. This comes as a bit of a surprise - Hasbro never released any Revenge of the Sith rank-and-file individually - Amazon got the all-white trooper, and at work I got us the 501st/Shock Trooper/212th/442nd groups as an exclusive (which nobody bought at the time, and now sells north of $500, not that I'm bitter. It seems unnecessary to tool a new trooper - but I don't deny there are some improvements... and some non-improvements. What could have been a quick color change is instead a complete top-to-bottom makeover, which I assume means repaints are coming in force.

Starting at the head, we get an all-new helmet with a head glued inside. This future-proofs the figure and allows Hasbro to easily make removable helmet versions down the road with minimal remolding. This also looks wonky. When I got the box open I was asking myself it was misshapen - and it seems to be. The head stretched out the helmet in a weird, asymmetrical way that didn't happen with the older, solid helmet heads. The "face" is distorted a bit, and the t-visor doesn't merge into the also misshapen mouth area very well. The eyebrow black equator isn't on this revision of the armor, so it looks weird because of that, too. It's not the worst Clone helmet I've ever seen... is what I would like to say, but this is probably the worst one I've seen since their 2002 debut. From a distance, it looks just fine, but there's enough about it - like the various small stripes at what seem to be the wrong angle, with the wrong spacing - just turns me off. I hope there's a running change/improvement in an "Archive Series"-type release in the future.

The body deco is pretty solid - the stripes are thicker and placed a tiny bit different than on the show, but everything seems to be the right color and essentially looks fine. They're squeaky-clean, with the nifty squad marks on the shoulders. The thigh stripes are a little thicker than on the show, but I prefer the look of the Hasbro toy. Similarly, the arm stripes are thicker - and raised higher - but this seems to have been done to account for the new elbow articulation. Any lower, and they might get cut off on the back somewhere. The belt also matches nicely. All I can say here is that I have no legit complaints about the body deco, they did good. 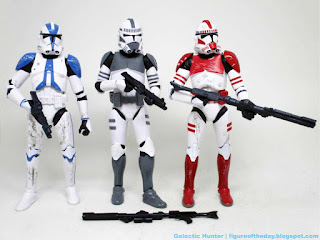 While I would have been perfectly good existing tooling, Hasbro did a new one to show off its new "let's hide the joint pin" mentality. In that respect, this figure is perfect - you really can't see them! Everything is inset like the 3 3/4-inch figures, with things like thigh swivels nicely hidden by where the armor meets the body glove. I don't believe the figure has the motion where the shoulders can swing forward a bit, but mine might just be stuck - it looks like the parts there there, but they're not moving. The bend-and swivel wrists are great, as are the rocker ankles. The hips and shoulders have a good range of motion, and the ball-jointed waist joint seems to be a much more mobile area than previous releases. So what don't I like? The knees and elbows. They're jointed like the 3 3/4-inch guys, but the elements capping the knee and elbow are semi-floating pieces - they get in the way, and the color is a tiny bit off from the other white. I'd rather they be molded to the other pieces, as they sometimes get in the way and look like they contain thin plastic pieces that, if treated roughly, will snap over time like your old Dewback or Tauntaun reins. 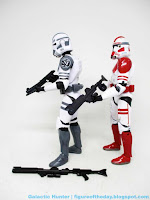 The figure's weapons seem to be newer and a little different. The big long DC-15A blaster rifle is either a new mold, or has experienced shrinkage. It's incredibly close to the previous release, but sharper and the tiniest bit smaller. Without comparing them side by side, I don't think I'd realize they were different molds. The smaller DC-15A blaster carbine is also included, and I'm not crazy about it. The movie design has a couple of cables on the front end, while this one has something that looks like more of a nub. It's very close, but smaller than, the original smaller blaster's release for The Black Series.

I am smitten with the Entertainment Earth and Amazon exclusive Phase II clone armor - it's so shiny, with glossy black visors and exquisite paint damage. The Kamino Clone is a new mold that needs some work - the warped helmet, non-glossy armor, and weird knees and elbows (which have an excellent range of motion, minus the floating piece) make it interesting. But it's not my favorite. If Hasbro could just keep using the existing armor bodies I'd be pretty happy, but if they made a better helmet for future releases of this new mold I'd be happy with that, too. Weird elbows and knees aren't a huge deal, but a wonky helmet is the difference between "good figure" and "bad flea market bootleg Clome Tooper."