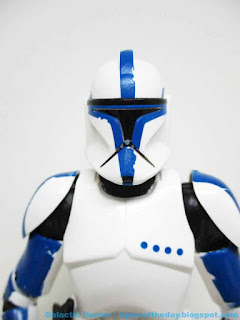 Bio: Throughout the Clone Wars, Clone Troopers fought the Battle Droids of the Separatists across the galaxy. They were loyal to their Jedi generals and the Supreme Chancellor. (Taken from the packaging.) 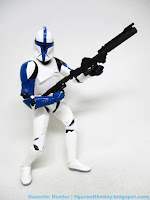 Commentary: Toy runs aren't really a thing this year, but I did stop in a Walgreens on the way to the post office only to find a Clone Trooper (Lieutenant) with a slightly damaged box. I didn't notice the damage in the store, but hey, I'm opening it anyway and anything I can do to limit the amount of time I spend around sick people nearer to flu season is good. The timing is strange, welcome, and annoying all at once. You see, Hasbro did its Phase I Clone a few years ago and gave us every color and rank except the blue lieutenant. Everybody had "clean" stripes... except the scuffed lieutenant. And right around the same time we got this figure, Hasbro revealed its all-new sculpt phase I body, which probably means all the ranked clones will get new figures too. It's annoying - but if you want to finish the set from before, now is the time to go do that. 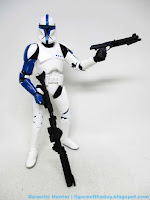 While the green clone's colors are always off - even its white is weird! - the whites are pretty consistent in the rest of the crew. The stripe locations on the arms are a little different, but you might not notice that unless someone points it out to you. The blue seems a bit darker than the movie rendered armor, but closer to the action figures from the 2003-2005 era. Given the fact that the figure is, by design, an obsolete sculpt likely retiring here, I don't have a problem with this. If Hasbro is planning on giving us the revised Phase 1 sculpt later with a corrected stripe (and I have every reason to believe they would do this in the next 5-10 years) all I can say is that this is a perfectly good figure for right now, but by no means the definitive take on the design. It's weird to see a 2002 design in 2020 and say "well sure it's wrong but clearly Hasbro has plans to redo it anyway" but everything seems to indicate that reality is in the cards. I'd be more shocked if we didn't get a 2.0 later.

He's a fine addition to Rex's army, he's got 2 blasters and about 30 points of articulation, and he's theoretically available when you pick up your heating pads or anti-fungal whatever or cold medicine. Obviously if you're at-risk take care of yourself, but if there's a reason to be in a Walgreen's anyway you may as well get this figure in its unmarked exclusive box. I like a lot of the prequel designs, and this one seems to have aged well. And in this era of non-canon weird shiny/festive/muddied repaints, I'm thrilled to see a repaint of something from the movies I enjoyed that isn't just different enough to make me mad.

Collector's Notes: I got mine from Walgreens. Back in October.