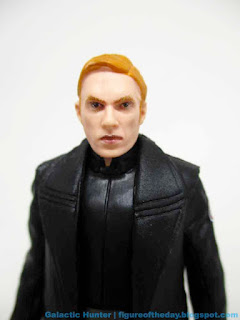 Bio: In the galaxy's unknown regions, former Imperial officers, nobles, and technologists plotted a return to power, building fleets and armies in secret. This movement became the First Order. (Taken from the packaging.) 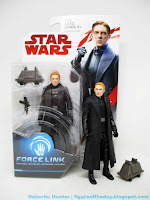 Commentary: This may be the best damn thing I bought this year. And I didn't even want it when I placed the order. Before Hasbro finally broke my completism with the triple-threat of carbonized, holiday, and credit repaints all in a week I was ordering everything - including the Celebrate the Saga packs. It turns out this was a good move, because General Hux and other humans got that fancy hyperreal paint treatment and it was worth it. I'm not saying you should pay $30 for Hux and barely-changed reissues of troopers you already own... but have you seen how well they nailed Domhnall Gleeson's face?

Arguably one of the more interesting (if chaotic) characters in the sequel trilogy, Hux went from screaming space Nazi to decent comic villain to petty turncoat, making his arc arguably more interesting than most of our heroes. While he didn't necessarily grow as a person, you got to see his bluster for what it was, effectively making him a very Starscream-y villain. How appropriate! It would've been interesting to have him stick around as a post-trilogy villain in some future installment because as a true believer and someone who wanted to keep his job and power, he would be worth following. And if you didn't see The Rise of Skywalker yet and this somehow ruined it for you, you're welcome, just go watch the cartoons instead. Any cartoon. You'll be served better. 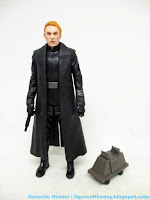 Anyway, this figure is a redeco of the 2017 The Last Jedi Hux. It was a big improvement in the facial area when compared to the 2015 figure, but this one does it better by giving him better eyes, better eyebrows, great hair, and painted lips. Under a macro lens it may not be perfect, but to my human eyes it's a remarkable advancement given his melon is about the size of a raisin. It amazes me that this is a mass-produced thing and not a bespoke redeco for a crazy person. The sharp cheekbones are perfectly sculpted, the scowl is just perfect, the hair is sharp, and the eyes are piercing. The First Logo symbol on his sleeve is sharp and has some red in it - that's impressive. The silver stripes on his cuffs are clean, the belt buckle is good, and the glossy boots? Also nice. You can slide off his coat if you like, and he has a nice blaster. When the coat is removed, the articulation is perfect - he can sit! Remember sitting? When I was a kid, everybody except Anakin and Amanaman could sit pretty well. 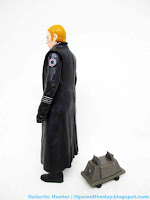 He also has a Mouse Droid, and it turned out well - rolling wheels, the whole bit. You might already have one of these, but now you can have another one. They're small, they're cool.

It's maddening that Hasbro says they're stopping the 5POA line, because they finally got it right. These sets give you a lot for your money - four full-size human figures and sometimes a fifth full-size (or pint-size) droid for $30 with the best-paint ever is a bargain. The last time Hux was sold, he was $8 - and didn't look this good. For an average of six bucks a figure, we can see we were probably overcharged for the last few movies what with their excessive accessories and useless ForceLink chips. This line could've been amazing. Hasbro's still got it, if they want to go for it, they can still impress the daylights out of me which I didn't think was going to be possible in the year where this amazing paint is glossed over and time is spent applying peppermint and cheer to troopers for some reason.

This is one of the best things Hasbro ever made as a 3 3/4-inch release. If I was making a book with the 100 best Star Wars figures of all time (publishers, call my agent) this one would make the cut. And I've reviewed enough of these things to know what constitutes "best."

Email ThisBlogThis!Share to TwitterShare to FacebookShare to Pinterest
Labels: Celebrate the Saga, Exclusive, Hux, The First Order, The First Order Officers, The Last Jedi, The Rise of Skywalker