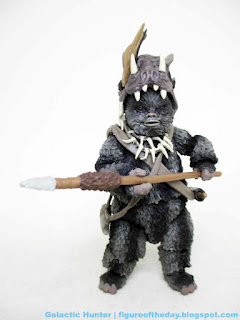 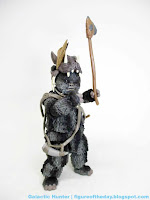 Commentary: Figures like Teebo are exciting reasons to keep collecting. Interestingly, he's a pretool - the stamp on his foot is the SKU for Paploo in the SDCC/PulseCon set, but he's got lots of good original (and shared) parts to make for a convincing take on the alien as he appears on screen. Teebo is shown with different costumes depending on the reference - one has a cowl around his neck, one doesn't - and while the 3 3/4-inch line covered both bases, this one picked a side. Harrumph. I would have liked both cowls given the figure's small size and full retail price, but even with that gripe it's still a remarkable piece of work.

The figure has most of what you could want - you get the axe, the spear from his first appearance with the Rebels, the horn on his bandolier, and even a little knife for the sheath on his other bandolier. The necklace is there, the hood with the dead animal looks slick, and there's a feather in his cap, too. It's the meaner style of Ewok face rather than the cuddlier, kinder Kenner faces we got after Chirpa and Logray back in the day, too. The fur is dark grey with darker grey stripes, and dagnabbit it's gorgeous. 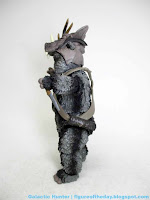 I hope time proves me wrong, but I have to assume this is as good as these Ewok figures can get without finding a way to make fur or flocking that holds up over time. The rubbery feel of the fur sets Teebo apart from a lot of other figures - as does his lack of pants - so I'm pretty happy we a) got this figure and b) Hasbro took their time to get it right. It's something of a miracle that we got an Ewok in a non-anniversary year, or so it seems, particularly since the focus was on The Empire Strikes Back earlier in the season. I feel almost spoiled that we got two weapons, but for all I know Hasbro is tooling that other hood for another exclusive rerelease later. While short, the piece count seems comparable to full-size humans and aliens. If you like Ewoks I hope you run out to buy one, or more accurately, bought it when it came out a few months ago.

Email ThisBlogThis!Share to TwitterShare to FacebookShare to Pinterest
Labels: Ewoks, Return of the Jedi, The Black Series 6-Inch