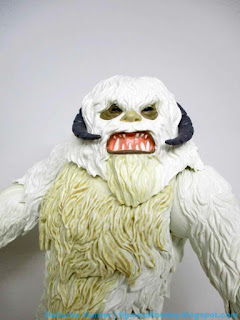 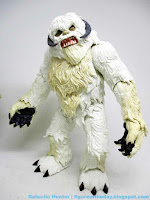 Commentary: I admit, the retro fifth-panel packaging won me over. The Hoth Wampa from the 1980s was my very first Star Wars toy - so remakes are always fun, and are always something I'm a bit critical of because they should be as good as (or better than) the original. Since 1998, Kenner and Hasbro tend to give them a couple of distinctive features like a bloodied arm stump and/or yellow urine stains. As a kid I liked the old Kenner toy even thought it was off-model, because the reference was hard to scrutinize and it's not like those pre-Return of the Jedi toys were usually 100% anyway. There were more than one Wampa costume anyway, so the triangular eyes and nose with the arrow mouth were pretty vague and glossed over the movie costumes, which sometimes looked like a Froud troll of some sort and sometimes looked like an eerily humanoid deep sea creature from some sort of snowy oblivion. By the late 1990s, Lucasfilm redid the suit and redesigned the creature with most of the toys being modeled on the 1997 redo - which I was never crazy about. 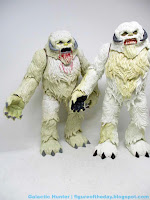 As a creature the Wampa always struck me as a really cool example of what these movies did right. Around every corner could be a horrible mysterious fate, with animals or not-yet-evolved future-sentient beings that could end your adventures really fast. The original trilogy was loaded with these kinds of threats, which seemed to diminish with the prequels and sequels and even the TV shows. Their role in the movie was cut down because - according to legend - the Echo Base scenes looked terrible, but hey - the brief glimpses we got were really something, right? Sometimes less is more, and that's why I'm sitting here talking about a snowman toy 40 years after the movie came out. 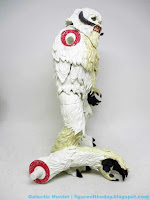 This 2020 convention Wampa is a redeco of a spectacular set from 2015. At the time, it came with Luke and cost $40 - it seemed super cheap, which Hasbro probably figured out and that's why you're paying $30 for just the Wampa this time. I am hesitant to say it's completely superior, but it is sufficiently different. The sculpt mixes up elements of previous Wampas, so its nose is a little more pronounced than the '97 suit, but it does have the blood, and of course it's got the stump. The interior of the paws is now decorated, whereas the 1997 movie version had hints of paw pads but was mostly visible fluff inside the hands. The horns and claws are a bit darker brown, much more like the original Kenner action figure, and there's more brown around the eyes and on the nose like the 1980s toy too. The yellow is toned down a bit, and the mouth blood is mercifully gone. (I never liked that.) I'm not crazy about the mouth - the 2015 version's dark interior made more sense, the 2020 one is bright pink with a brown lip outline that just doesn't seem right. I don't hate it - but it does seem strange given most mouth interiors tend to be darker, shadowy places and this is downright bright and cheery. In terms of deco, I prefer this - it may not be more accurate to the film amalgamation we got before, but it feels right. When it comes to retro toys, feeling right is sometimes more important than complete authenticity. 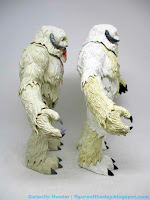 The sculpting is still great. It may not be my favorite modern-era wampa (that'd be the Solo-era ForceLink 2.0 Wampa [FOTD #2,485] but it's still really good. It's big and heavy, putting other deluxe $30 The Black Series figures to shame. This sucker is outright heavy compared to Zeb, Gamorreans, Moloch, Grievous, the not-so-Heavy Infantry Mandalorian, or the shockingly slight Probe Droid. This sucker is meaty and fantastic - and he's got about 25 joints with a removable right arm complete with meaty ring underneath. I would've loved it if they kept the paw-slam action of the original toy, but someone mistakenly decided that collectors don't want play features on their toys. I would very much like a silly slap mechanism, but I'll settle for things like rocker ankles, thigh swivels, and multiple torso joints expertly cut in rings of rubbery fur.

If you missed the original 6-inch scale Wampa with Luke from 2015, this is a good substitute. Well, at least it is for as long as the price is fair, it sold out quickly and I hope Hasbro considers doing another round of it and the Tauntaun for everybody that missed out. They're really good! If you have the 2015 release it might be good enough - I certainly wouldn't have gone to my grave thinking Hasbro should've given it a more Kennerian paint job - but seeing it in front of me, it's a lot better. And it's certainly better than the early test shots from 2015 which forgot to paint the horns!

Collector's Notes: I got mine from Hasbro Pulse. Thanks for your help, Seth!