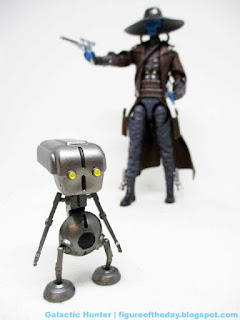 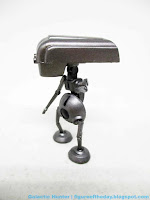 Commentary: I can't say Todo 360 - despite being played by the always great Seth Green and having a striking design - made a big impression. We got one about 10 years ago, and for about $7.99 he came with Cad Bane. Now he's barely taller, and costs an extra $10 for the slightly larger scale. Is it worth it? No, not really. But that's what it costs, and it's neat. It's also imperfect, so there's reason to reissue it - the figure's head is missing a key decal on the back that you can barely see in the cartoon.

The figure is somewhat tiny at 2-inches tall, which means it's not a 3 3/4-inch figure, which means it shouldn't be $10. Even Baby Yoda had some accessories at $10. This one has similar articulation - ball neck, ball shoulder, ball ankles, ball hips. The elbows and wrists are too small to make jointed, but that almost doesn't matter since they put in exactly as many joints as you need to keep this pot-bellied, toaster-headed droid remain upright. I find this to be incredibly impressive - someone figured out exactly how much articulation you need to deliver the figure's ability to stand, and that's exactly what we got. 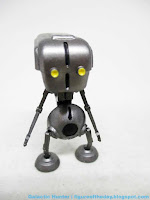 The sculpt looks just like the cartoon - the proportions seem consistent with the animation, complete with brushed metal finish. Hasbro made sure it looked good with black detailing and bright yellow eyes that pop nicely, and my guess is most people will never miss the painted detail on the back of the elongated head. From the front, it looks absolutely perfect. You believe it could be animated, and you can believe it's "realistic." The ball-jointed feet do wonders to ensuring the figure can keep upright, but we'll see how wear-and-tear plus gravity and time affect that. I'd recommend you get this set if you can, and if you can't, please join me in begging Hasbro to reissue it on a 40th anniversary-sized retro card in the blue and black 2010 style with Cad Bane for a convention or something. It'd be awesome. Let's make some people happy.