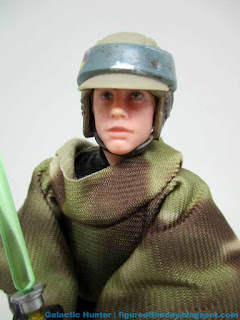 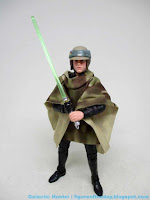 Commentary: For older fans, Luke Skywalker (Endor) is a remake of a classic figure that was really hard to get in the 1980s - it was one of the last ones I tracked down thousands of years ago back in 1990. Any new version of those characters is delightful, and this one uses new and old parts dating back to 2014. This Luke started life as a "Death Star Luke" in the blue box line, but now has a new head, helmet, poncho, and belt. It's a really cool figure, but renders the 2014 Death Star Luke as kind of unnecessary - minus the belt. 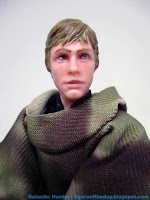 Articulation is just as good - and the same - as the previous Luke. He can double-grip the lightsaber just as well, but he lacks a pistol like the original Power of the Force (and later Power of the Force) figures. The colors on the earlier toys have all been pretty great, so this one matches them quite nicely. The paint is good, but the head sculpt seems to be another Luke figure that vaguely looks like the actor. It's by no means bad, but it doesn't feel quite right. The lightsaber is good, the articulation is great, and it's surprising we didn't get this figure packed with another Speeder Bike at mass retail.

I'd say this is an essential figure until Hasbro makes a better one. The Poncho does a great job obfuscating the old-style knee joints. Elbows aren't as mobile as other recent figures, but it's probably good enough. Had Hasbro packed a blaster in the box I'd say there's no real reason to do it again - but I think there's some room to improve the face and elbows, too.