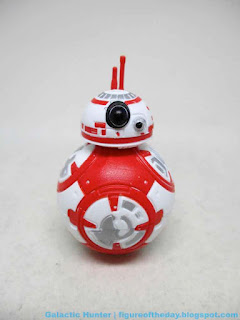 BB-H20 Disney Parks Christmas Exclusive
Star Wars Droid Factory
Item No.: ???
Manufacturer: Disney
Number: n/a
Includes: n/a
Action Feature: Comes apart
Retail: $12.99
Availability: October 2020
Appearances: n/a
Bio: All different types of Astromech droids populate the Star Wars galaxy. Each droid is different and has their own unique personality and colors. This droid aided the Resistance on teh salty, mineral world of Crait! Join BB-H2 on his adventures throughout the galaxy. May the Force be with you... and your Droids! (Taken from the figure's packaging.) 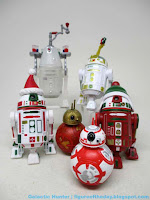 Commentary: Sometimes Hasbro seems to get it, and sometimes Disney seems to get it. BB-H20 shows that when left to their own devices - which makes sense - they do a pretty good job with the holiday action figures. Doing a droid repaint that somehow doesn't look too kitschy while also keeping in line with what makes a droid belong in Star Wars is tough, and Disney has done a bang-up job with these while Hasbro's track record went from amazing in 2002 to dreadful by 2005. (I would argue this year's The Black Series line may scratch the kitsch itch for non-collectors, but as a long time fan it was where I actually packed in the completism. I can handle 1 or 2 "meh" figures a year, but $200-$300 in a couple of months? No.) This little guy works for me. 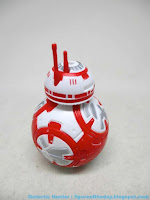 It's the basic Disney BB droid design, which means a twisting head and a wobbly body that opens at the equator and has a removable, weighted, and still surprisingly painted ball inside. The Disney BB droids are slightly bigger and heavier than Hasbro's, meaning they won't fit in the 2019 Poe Dameron X-Wing from Hasbro. But they do look a bit better on a shelf!

Inside, BB-H20 has a grey and silver core. Outside, it looks a bit like Target's BB-Series Droid [FOTD #2,733] from earlier this year. BB-H20 could be inspired by a holiday sweater or a candy cane, but it's ambiguous. The pattern is unique to this robot, and since red and white is a common droid color scheme there's nothing that would prevent it from looking like it belongs in just about any post-Imperial diorama.

The holiday droid phenomenon is not a bad line-up - were it a run-of-the-mill Hasbro repaint you'd probably buy it and say "hey, cool." At $13 it's not very cool - after tax and shipping, less so - but it's well-executed with nice clean paint lines and a design that doesn't feel out of place, or tacky, when compared to some of the earlier releases. (Or Hasbro's 2020 The Black Series holiday figures.) I'd say this is one of the best ones only because it's subtle, but perhaps it's too subtle - and I was also anticipating a snowman-themed BB-unit. Maybe next year!

Collector's Notes: I got this from ShopDisney.com.

Good looking droid. I'm fine with the Holiday themed figures. Makes for some fun. I won't pick any up but nothing wrong with them being put out there for folks.