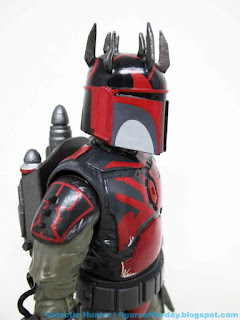 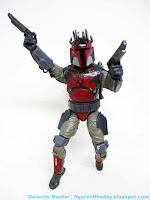 Commentary: This Mandalorian Super Commando has been on my figure wish list ever since seeing the sneak peek at Star Wars Celebration about 8 years ago. I immediately asked for it as an exclusive - this did not happen. But at least we eventually got a pretty good pair of Jango Fett retools based on the show! As my favorite segments for toys tend to be The Clone Wars and the Return of the Jedi - Star Tours eras, this mashup gives me everything I want. I appreciate it when Hasbro gets a figure to market before I know I want it, but it's not nearly as satisfying as getting something I've wanted for years - like this one! 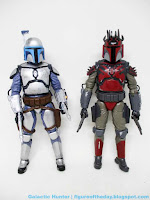 Our Mauldalorian is one of a few specialized Maul-esque repaints from the show, and probably the first one that stood out in preproduction materials. Later revisions include more stylized deco, a yellow t-visor, or hornless ones - plus countless other members of various clans, troopers, and Pre Vizsla. (All of which would be easy retools, hint hint Hasbro. Surely you know and love at least one online retailer that would adore to sell these.) While not at all sensible to have a $5 upcharge - there's less going on here than on Jango Fett - this red and black trooper is a gorgeous figure you're going to want to overpay for anyway. 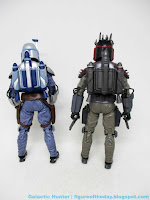 New sculpted elements incude blasters, the upper legs (with molded holsters), a new belt, spiky shoulder pands, and a new, non-removable helmet. The figure retains the rest of Jango's gear, like the Geonosis-specific backpack, the gauntlets wired in to the biceps (which were not on the animated models), and the same feet. The articulation isn't as impressive as some recent releases given Jango was first released several years aog, but it's very good and a well-executed retool. Given The Clone Wars is stylized, Hasbro and anyone doing "live-action" interpretations has a lot of wiggle-room. Since the troopers were basically mostly tweaked Jango Fett suits anyway, it seemed relatively easy to tool up a few new parts and get two new highly-anticipated and, at press time, hugely popular characters. I hope and expect they rerun these for ages, it's a bit of a pity they're not main-line items given what I assume will be months of demand to go. 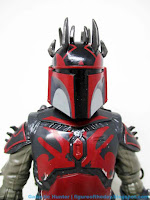 While I wish we got this guy in the 3 3/4-inch line - animated, live action, whatever - this is plenty good and I'd be happy to get more in any one scale. (I'd prefer they pick one and stick to it, though.) The figure is a bit back-heavy, but he can stand more easily than Jango and his holsters are a bit less rubbery - and therefore better. The helmet has sculpted horns and no rangefinder, making it distinctive and - so far - unique to this release. The mostly black and grey armor has Maul-like patterns all over, which is hugely cool in terms of the costume but horribly silly in terms of someone like Maul potentially keeping a low profile after being replaced in the order of the Sith after his whole forced bisection.

While not the best figure of 2020, this is another on my short list of absolute favorites. For a retool, Hasbro did an amazing job giving us a figure that looks exactly right by making use of existing tooling assets... but not skimping where there needed to be new ones. If I stopped collecting figures, I would've come back for this one - the Mandalorian Super Commando gives us the figure of legend, and it turned out especially well. If you can find one, buy one. Or two. I'm dying to see if we get the other figures from the series to go with him! (You know, like Cyborg Maul.) Good job, all those involved, which is why we're all sitting here waiting for more now.