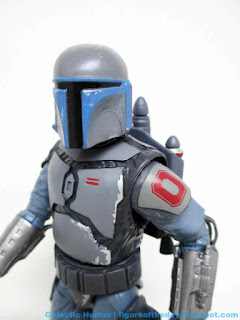 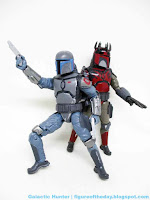 Commentary: This Mandalorian Loyalist is a great figure, and it's been nearly ten years since Hasbro made figures of them in any size. I'm glad they did - this Jango Fett retool isn't as ornate as the Super Commando, but it's still very good and fits in with the armor we saw in flashbacks during The Mandalorian. It shares some parts with Jango Fett and the aforementioned Super Commando, but the helmet and shoulder pads are unique to this figure, as is the deco. I'd love to get more of these but a) they're hard to find, and b) they're expensive. 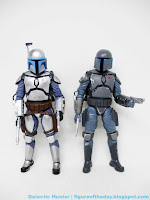 Based on a design previously sold as other figures like the very good 2010 Mandalorian Warrior [FOTD #1,379] which was a bit more saturated, so this looks like a more "realistic" trooper. It's missing the Boba-style rocket pack and instead goes for Jango's Geonosis battle arena, but it does have the proper helmet. There's a bit more light grey and silver on the animation models, but they did a good job capturing the red markings on the jetpack and right shoulder, plus the white mark on the left shoulder. Sadly, the lighter grey was left off the helmet, and the blue body suit isn't that blue. It still seems like an accurate rendering of a cartoony costume, though! 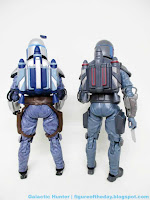 Since he uses Jango's body, you get the same 29 points of articulation. The retooled thighs with the specific holsters (and slightly less armoring) are present, leaving you with quite possibly the most perfect bulk purchase Mandalorian. Hasbro could easily make Pre Vizsla or other Mandalorians from the cartoons based on this outfit. Customizers could build a number of characters off of this design. Also, you'd probably want to troop-build this one if Hasbro and Walmart reran a ton of them. At press time that seems unlikely - but the long tail of history tends to trend toward meeting market demands over the last few years. 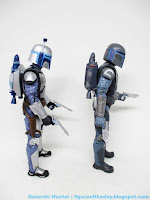 Hasbro did a good job here - and could recolor, retool, and keep reselling it for years to come. The Mandalorians should be the new Clone Trooper, where Hasbro finally milks the molds dry to give us Fenn Shysa, Jodo Kast, Pre Vizsla, and anything else they feel like doing. They would probably sell really well - if people will buy weird green troopers, it might be prudent to make bright green Mandalorians with actual history and stories people remember and in some cases, really love. Kudos to Hasbro on a job well done here.