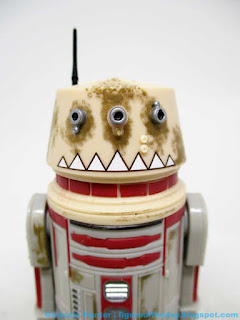 Bio: R5-P8 is Hondo Ohnaka's most capable astromech and serves as an automated repair mechanic on Hondo's many starships. This sassy droid calls Hondo out on occasion, always keeping the pirate on his toes. (Taken from the packaging.) 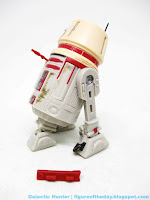 Commentary: I like droids, and I'm glad when we get new and weird ones. R5-P8 was made in two sizes by Hasbro this year, and Disney made one a few years ago. There's also a die-cast metal one available from Disney Stores.

Comparing this toy from the models at the theme park that I've seen online - and also the cartoon - it's not particularly precise. It's good and the key landmarks are there, as the Galaxy's Edge droid lacks the blaster we saw in The Clone Wars. The crudely drawn underbite is on the dome, and looks great. The red panels closely match the prop on display, but a lot of deco elements are missing - the octagon on the front is left unpainted, the vents behind it are also left unpainted. The black box around the greeblies on the shoulders are unpainted. I don't see this as a problem, mostly because this droid is going to be bought by a lot of people who aren't able to get to the theme park any time soon.

Given the $5 upcharge, Hasbro didn't meet the low standards I have for a good exclusive. He's got a little dirt on his dome - not much - and there's no new tooling here. Hasbro could've and should've had extra paint applications for the price, but there's no room to make changes at this point. If the price is right, it's a nicely constructed droid consistent with the other robots Hasbro has released since 2013. No other 6-inch scale droid has painted teeth, and that alone makes it a fun addition to my robot shelf. I doubt we'll see them take a second crack at it. It has the rolling wheels the retractable leg, and the scuffed-up deco we want. It could be more impressive, but it's certainly good enough that I won't dump on it. I'd love to see more like this, but either at $19.99 or with more gear or more paint if it stays $24.99. 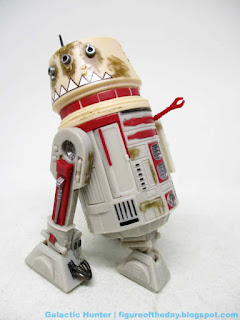 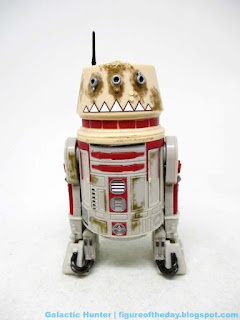 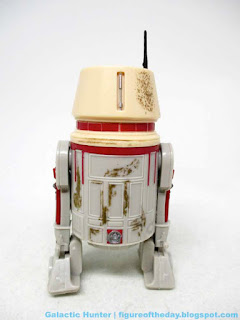