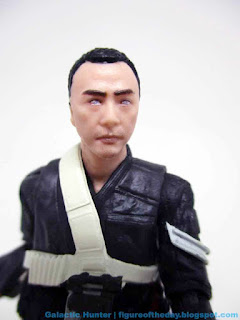 CHIRRUT IMWE (Vintage Debut)
The Vintage Collection 3 3/4-Inch Action Figure
Item No.: Asst. E7763 No. E9397
Manufacturer: Hasbro
Number: #174
Includes: Staff, lightbow
Action Feature: n/a
Retail: $12.99
Availability: October 2020
Appearances: Rogue One: A Star Wars Story
Bio: Chirrut Îmwe was a blind human born on the moon Jedha in 52 BBY. One of the Guardians of the Whills, an order of spiritual warrior-monks, he was active during the days of the Galactic Empire and worked as an itinerant preacher in Jedha City. (Stolen from Wookieepedia. There is no bio.) 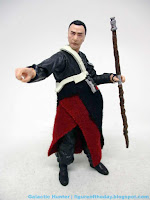 Commentary: I wasn't expecting a new Chirrut Imwe figure so soon, but Hasbro thinks everybody wants more Rogue One stuff. Maybe they do - but I'd put my money on background weirdos from The Mandalorian. This is the third release of Mr. Imwe, previous figures were based on simpler, cheaper figures with less articulation and one even had a big goofy bow. They stood well and looked cool, so I didn't think we needed an upgrade - I still don't, but hey, it's good. That counts for something.

It still looks like Donnie Yen, complete with milky eye contacts and the better-than-average printed face on the pea-sized head. The lips and hair are good, and the face is consistent with his on-screen personality. He stands, but finding his center of gravity might be tough. The articulation is good, but the soft goods are a bit bulky. There's part of his robes that are plastic, too, so while you can get some good combat stances out of him he's worthless to sit in vehicles. I wish they'd pick cloth or plastic and stick with it - and lately, I wish they'd just skip the cloth when they get to be too thick. Assuming you can get him to balance once you find a pose you like, it's perfectly nice - but I wish it could be a bit more consistent with the robe materials. 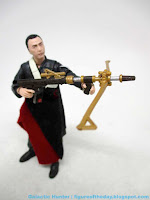 Accessories are also good. It's a stick. The bow can't collapse but the perpendicular element can come off completely, which is annoying. It's sort of like Chewbacca's many bowcasters - you wish they included a dab of glue here, or joints to collapse it a bit. Deco on the accessories is very good, given the usual basis of comparison is unpainted plastic. The cane has brown weathering and silver highlights, while the lightbow has golds, browns, and silvers. It's good. You'll like it.

If you need a Chirrut, I assume this is the last 3 3/4-inch one you'll ever see until or unless Hasbro adopts them for The Retro Collection, which they should - complete with vinyl capes, given the chronology. If they can do a better one I'd be eager to see it, but for now it's fine. Maybe they'll go back and do some Blue Squadron pilots and aliens - I like Rogue One a lot, but I miss getting new characters a lot. "Do you want to buy the same guy again?" is not the kind of thing I wish Hasbro would do with their development dollars.