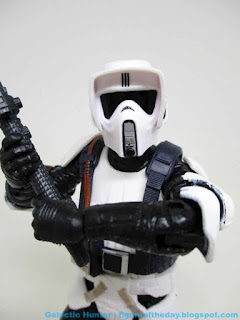 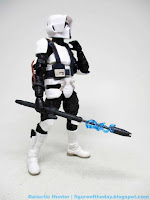 Commentary: This Scout Trooper brings back the figure from last year, which brought back the figure from a few years ago, with more gear at a higher price! I'm not crazy about the 25% price increases, but I will say it's a nice figure. More than just a redeco, the figure adds a new harness, a new baton, and an energy effect. Is less paint and more gear worth $5? From Hasbro, it seems excessive - but if a fan-made upgrade pack were produced, it'd cost significantly more.

Is it worthwhile? I'd say so - the original Speeder Bike and Biker Scout set was a good deal, and the trooper figure was above par for its time. It has held up remarkably well, as the double-jointed knees and elbows are a lot more subtle. You've also got boot swivels, rocker ankles, bend-and-swivel wrists, neck joints, bicep swivels, and a grand total of at least 33 joints. While I think the visor on the helmet may be a tad large, everything else about the figure's body and design is still exceptional. The new tooling comes in the form of the weapon, and also the harness. For some reason the harness covers the torso and elements of the right arm. Is it exciting? No. But it's something. It adds some distinction to what would've just been the same guy and a stick. 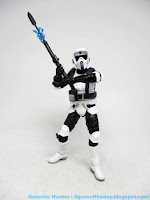 A tighter blaster holster would be nice, but I'm probably going to settle for adding a rubber band. It's also easy to miss that this is the first "clean" Biker Scout in this size, as the Archive and bike-pack-in both had a lot of dirt on them for reasons I don't quite understand.

The new baton fits in his hands nicely, with a slightly awkward blue energy surge on the tip. It's fine. I like how it looks, particularly since the figure has good arm articulation. I hope Hasbro just keeps using this sculpt instead of retooling it, and hopefully rereleases it a few more times with slightly different changes. I am hesitant to call it "essential" because I don't know if Hasbro will crank them out again on a 40th anniversary cardback later, but if they don't, this may well be the best Return of the Jedi Biker Scout thanks to it being clean. You can snip off the harness if you like - given the price, I'd advise against it - but it's just a nice, plain, good figure. I hope you got one, especially if you liked the game.