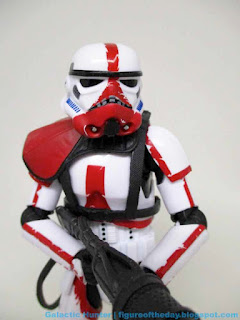 Bio: Incinerator Trooper armor was exceptionally heat-resistant and bore red markings in order to indicate their speciality. (Taken from the packaging.) 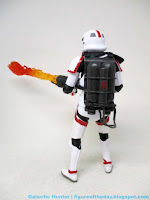 Commentary: Happy new year! This Incinerator Trooper comes from The Mandalorian, but previously was seen in The Force Unleashed video games. While most likely never to be integrated into the new canon on their own, the troopers have gotten a lot of love as toys from Hasbro as GameStop exclusives over the last year - and thankfully so, they're wonderful designs and easy repaints. The previous ones used a mold that's been in use since 2013, while the 2020 Incinerator Trooper uses the 2020 Imperial Stormtrooper [FOTD #2,739] mold. It's new, it's good, and you can probably safely assume we'll see many more figures using it going forward.

What's kind of awesome - and also not - is that this is the same figure at the same price, with lots more paint and gear. You don't get the basic Rogue One-style blaster, but you do get a much bigger torch, a pauldron, a harness, and lots of red paint - plus a massive fire blast effect piece. The plain trooper was a decent value proposition, but this plussed-up specialty torch Stormtrooper is significantly more exciting. (You will, of course, want both.)

I had no problems getting the figure to hold a torch in one hand, but gravity does make the fire blast seem to sag a bit over time on a shelf. You may want to make sure the figure - and possibly the accessories - are propped up if he is to spend a year or more on a shelf. The fire blast is molded to snap in perfectly on the nozzle of your torch, which is a lot more stable than the 3mm (or 5mm) pegs used in the Transformers: War for Cybertron C.O.M.B.A.T. system. (Check 'em out in Siege and Earthrise toys. Less so in Kingdom.) I wish he could hold the weapon in both hands without a fuss, but the left hand isn't as well-equipped for gripping things. 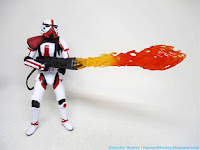 As a figure, this is a sensible and desirable retool of a trooper fans want anyway. Repaints of them are likely to continue, but that's a good thing - this is the sort of thing that sells easily. What's particularly exciting about figures like this is that we're seeing today - like when Lucas pulled Aayla Secura out of the comics and put her in the movies - that being removed from canon certainly doesn't mean a ticket to oblivion. We're still seeing Darth Revan products, we got a Jaina Solo figure, and seeing good designs plucked from relative obscurity and upgraded to full-fledged on-screen props could mean just about anything could make an appearance in a future TV show. (I volunteer to play Tig Fromm if the chance comes up, maybe in some sort of audio drama, please and thank you.)