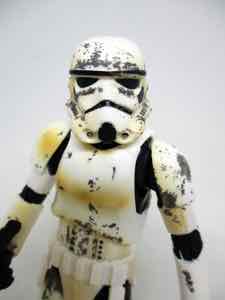 Bio: The Empire is in disarray. The once-proud pristine and uniform ranks of Stormtroopers that fought for the Empire now resemble a ragtag army of mercenaries for lawless gangsters. (Taken from Hasbro marketing materials.) 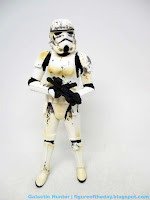 Commentary: I like this Remnant Stormtrooper because it makes a lot of sense. Fans love battle damage, and The Mandalorian, and killing and white uniforms. We know this. The figure is the same as the Imperial Stormtrooper [FOTD #2,739] from a few months ago, but with more dirt. From where I sit, that's good enough - it also makes at least three uses of this new mold so far. Between exclusives, variant troopers, and the like, Hasbro is really cashing in on these molds right now.

Articulation remains good, the figure's hands are great at gripping the blaster, and articulation is as good as a better-than-average 3 3/4-inch figure - complete with the nicely articulated shoulders. Limbs all move nicely, without any weird ratcheting or wobbly feet threatening to knock the figure over at any time. I had no problems getting the figure's helmet posed to look menacing or inquisitive, and it once again has a blank white human head glued to the inside of the helmet. It's future-proofed for customs or other possibilities, but it's still kind of odd to me as it means an extra piece and extra materials were used to manufacture the figure. 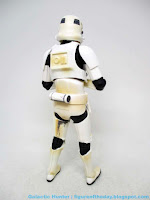 The main selling point is the deco. It's different! For those who have been here for decades, the brown dirt looks sort of like the Endor smudging we saw on 3 3/4-inch troopers in 2007, while the grey splatter seems new. I think it's supposed to present wear and tear, but given that the armor has looked (and sounded) like plastic, I can't imagine it isn't white all the way through. From where I sit, that would mean we're supposed to assume they just plain don't clean the armor any more, or live in a galaxy where faster-than-light travel is possible but melamine foam somehow got overlooked. The grit looks true to the show, so it's certainly a good replica - but it's light on damage on the back. There are some stains, including one very unfortunate looking one that looks like a leak out of the butt region. I leave it to your imagination to explain.

The Remnant Stormtrooper is a good one - decent sculpt, better than average deco, nothing special in the weapons department but at least it's a decent $20 release. If you see it, do yourself a favor and get it. Or maybe get two or three. Collector's Notes: I got mine from Target.