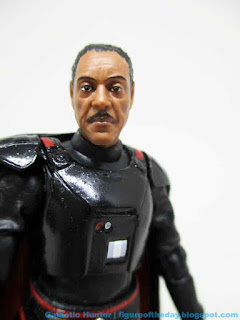 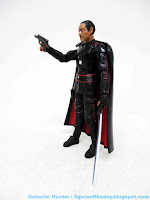 Commentary: This figure's release was inevitable, but how Hasbro would execute Moff Gideon was up for grabs. Pre Vizsla got a Darksaber in 2010, and it was clear - this is an opaque weapon with white stripes. He also has a blaster and a cape, plus one of the very best heads I've seen on a figure this size - arguably tied with the 2020 rerelease of General Hux. Hasbro nailed this one in almost every respect - the leg articulation could be better (if there's ever a new TIE Fighter for him) and I'd have liked the weapon to look different. But otherwise? Dynamite. If he's going to stand around or remain carded, this is one of the very best action figures you can buy.

If there's a reason behind his costume, I don't know what it is - along with Werner Herzog's The Client, I just assume that high-ranking officials are just hiring their own tailors now. Most Generals and Moffs wore similar garments, plus or minus hats and capes. Gideon seems to be pulling from a number of sources, with a chest plate that recalls Darth Vader and a TIE Fighter Pilot, with red "ace" striping and a startling quantity of black and red that seems to foretell the rise of the First Order. (And if his experiments have to do anything with the Emperor or Snoke, that would make sense.) The figure itself is a mix of shiny and glossy, with a great range of articulation and no problems holding his lightsaber. The tiny blaster fits right in the holster, too. The red trim is gorgeous, and there are little dots on his outfit that they could have left off and you probably wouldn't have missed. The red cape trim is also a nice touch - this isn't a figure where you can see a lot of shortcuts. You get your money's worth here. 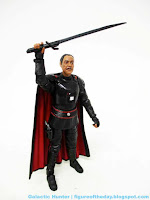 Gideon's head is amazing. The wrinkles, the mustache, the eyes, the paint - even the hair is good. It's amazing just how far we've come, and it's my hope that we see them apply this level if craziness to more of the legacy characters too. And if they don't, at least we'll be assured that every new release will look - at worst - spectacular. I hope they sent Giancarlo Esposito one and I hope they also sent him some other figures just so they can see how much better his is.

The cape plugs into the back like a G.I. Joe, and overall this is a pretty good figure. It's stable, the ankle joints are good, he doesn't seem too wobbly on my desk while I type this either. I don't have to fight to find his center of gravity. Hasbro should be applauded here, this is an excellent figure and continued proof that when Hasbro does an all-new figure and keeps refining these figures, what we get is better and well worth the increased price creep. (But only on new one. Reruns... just make new ones.)