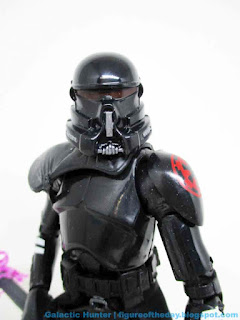 Bio: Star Wars Jedi: Fallen Order features Purge Troopers, a new class of soldiers who assist the Inquisitors in hunting down any remaining Jedi. (Taken from the figure's packaging.) 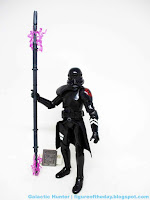 Commentary: I am not as crazy about the Electrostaff Purge Trooper as I am the Purge Stormtrooper [FOTD #2,686] from 2019. In many respects the figure is very similar, with the differences being a much less dramatic paint job and a new staff (that's good) and magnum-sized electricity blasts for a snug-fit pole. They slide right off - they're bad. Fans are likely to want this figure for either the new accessory, which isn't very good, or just for the trooper because they missed the previous edition.

In 2021, this figure feels old. It uses the original Clone Trooper body with double-jointed (stiff) knees and elbows, making it harder to pose and keep him upright. Had this figure used the new 2020 body, it would undoubtedly feel more stable. It has a lot less red than the previous release (and fell over for the fourth or fifth time since I started to write this), with a very dark lens on the helmet, no red markings on the "face," one nice big Imperial cog on the left shoulder, and one masked (but present) on the right under the dark black pauldron. He has the grey chevrons, though, but is largely just a very black Clone Trooper body with an Airborne Clone head. The black is incredibly glossy and looks like a premium product, so for those of you who keep your figures in a box, go ahead and keep leaving it in the box. 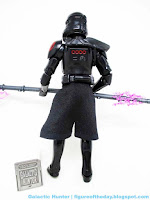 The pole accessory is massive, and may be one of the largest accessories in this line to date. It has no deco, and is pretty thick - getting the figure to grab it with the stiff hands is a little tricky. You'll want to take care posing the weapon, because the purple energy falls right off. It's unpleasant. It feels undercooked. This is the kind of thing that shouldn't get approved, let alone manufactured. Hasbro has had years of energy blast accessories done right, from various forms of Grievous' Magnaguard Droid bodyguards to Jedi lightsabers deflecting blasts to Sith lightning. To Transformers: War for Cybertron C.O.M.B.A.T. effect pieces to Power Rangers Lightning Collection energy pieces to Destro's burning money... let's just say I could go on. So far I haven't been disappointed by the grip on the energy pieces, and in some cases - like the Inferno Stormtrooper - I've been quite impressed by how well they perfectly plug on their weapon. But not this one. If this came out of a gumball machine for a buck, you'd be disappointed. Seeing as you got upcharged on this exclusive accessory, it's a disappointment. 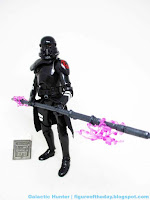 For completists or fans of the game, I assume this is a fun buy. The figure is nice, and if they did a better job with the accessories I would say it was a worthwhile purchase. As it is, I feel I got taken for yet another $25. A bad figure hurts a lot less in the 3 3/4-inch line thanks to the lower costs, but here each $25 disappointment adds up quickly. If you have the chance to get the previous release from a reissue (or a lucky find), get that one first. Get this one if you like losing more accessories to gravity.

Have we seen a 6" Airborne Trooper at all?

Not yet. Hasbro has been pretty sparse on that sort of thing.