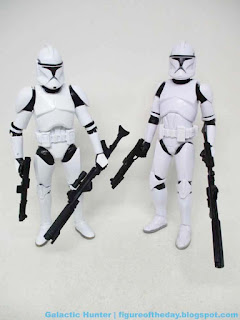 Bio: The Republic Clone Troopers represented the future of galactic warfare. So symbolic were they of their times, the galaxy-wide conflict that saw their debut took its name from their ranks: The Clone Wars. (Taken from the packaging.) 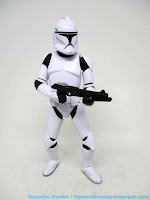 Commentary: As time goes on in any collectible toy line, the snake eats its tail. It just happens. This Phase I Clone Trooper is the second mold Hasbro made to represent this style of figure - and the body has been shared with at least two other figures so far. It's good - on the whole, it's built like an above-par 3 3/4-inch figure with hidden or recessed pins, making it a good Clone to army-build. If you have an existing army, maybe just buy one or two - or one of each, as I assume repaints are inevitable. 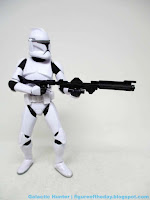 The sculpting is very much a Clone Trooper - there are no real surprises beyond the forward/backward joint on the shoulders, allowing additional movement beyond just swiveling. It's nice, but a limited range means you're not going to get too much of a dramatic difference in what you can pose here. This joint is a relatively new addition in the line, so I assume Hasbro is still going to perfect it in years to come. Wrists still bend and swivel, ankles rock, knees bend, and the head moves around nicely. It's worth noting the helmet has a head glued inside it, so sometimes you'll see a lumpy helmet. It's a good move to future-proof figures for when they want to do removable helmets down the road, but for now it seems like it's just added costs and a misshapen head. The helmet sculpt itself remains good, with the grey stripe around the back and the red light on the back of the crest. There's not much to dislike in terms of how it was all conceived. 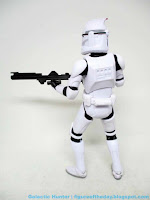 The one thing I don't love is the rubbery knee and elbow armor - there's a chance it might snap with age or stress, so be careful when moving those joints around. I saw enough busted-up Dewback and Tauntaun reins in my day to recognize a possible problem, but I'm also much older now and at least know what to expect. Moving those joints carefully allows you to get a bunch of nice action poses, and the figure has an excellent center of gravity. He's not so wobbly, and that's helpful.

The figure has a lot of potential for future repaints, and now that The Clone Wars is a popular show on a streaming service there's a new generations of fans wanting "shinies." I haven't seem a lot of this one in the wild as of yet, and I hope Hasbro keeps making them because fans will probably want a few in their toy boxes.