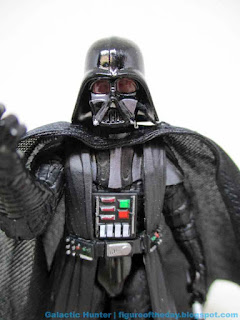 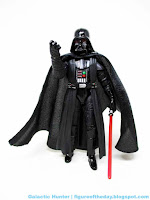 Commentary: Collecting The Vintage Collection in 2020 is tough - it's almost like buying a blind-box figure. I assumed Darth Vader was new - but he's not! I believe Hasbro even introduced him as new, but that's patently untrue - it's a mix of new (existing) parts on the old 2012 #93 Darth Vader [FOTD #1,855], which is kind of expensive so it's good he came back. But thanks to the new parts, the functionality is different.

So what's new? In short - deco, inner robes, lightsaber. I'm still setting up my 3 3/4-inch collection so I can't seem to locate the 2012 release right now, and it's hard to tell some of the mold changes that aren't obvious. The 2012 release had inner cloth robes, which have been replaced by rubbery plastic robes. Functionally these are both good and bad. I don't like that it means Darth Vader can't sit or go in a vehicle. I do like that they open in the back and you can tuck in the giant, ridiculous cloth cape inside. I really like this. The old belt and codpiece are gone, giving the figure an overall better, less diaper-y look. The robes on the top of the torso seem a bit thicker now, but it's still a decent look. Articulation is largely unchanged, and it's pre-thigh swivels. You get lateral hip articulation, but you won't use it much. I would love to see a 100% new Darth Vader 3 3/4-inch sculpt, but Hasbro seems to be in full-blown rerun mode for the foreseeable future (as long as tooling permits.)

Deco is improved. Hasbro has come a long way in the paintly arts since the previous generation of The Vintage Collection got kicked to the curb in late 2012, what with its photo-real deco on a head the size of a pea. Darth Vader benefits from this on the chest and helmet. His red eyes and silver cheek look great, while his neck is just plain black. I'm fairly sure it should be silver to match the cheek - but it's dark, it's in a low-visibility place, let's let it slide. Instead, let's focus on the chest buttons - the silver belt buckle, red and green lights, and various switches are as clean as I've ever seen them painted. Given the price increase since the last release, it's good to see they put some R&D into making this figure a little bit better.

Also, the lightsaber is worth noting. The hilt is a bit smaller, the blade lacks the energy blast at the hilt that we've seen on many of the figures since 2001, and it doesn't clip to a belt anywhere. (Pity.) It's a perfectly fine accessory and your go-to Vader for Slasher Madness in a diorama. The cardback photo is fine, but seems odd. The coloring is strange, the contrast is weird, it's not exactly a powerful image like the ones we had in the old days - particularly the 1983 cardback. If you see this figure and need a Vader, it's a very good one - but I would also bank on an all-new sculpt coming up in the next few years, unless they kill the scale off again.

Good looking figure. You would think they'd do something different with the sculp at some point. Good post.