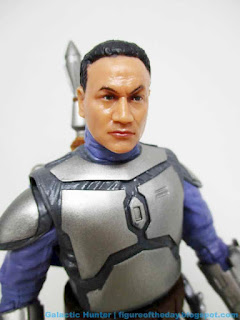 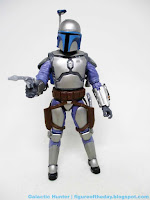 Commentary: The second Jango Fett! Part of me thought buying another release of Jango Fett would be a waste - and we've been subject to so many repaints and reissues this year, it's starting to sting a bit - but I ordered anyway, and am glad I did. It's not much of an upgrade, but there are numerous improvements over the previous release which I am now realizing I never reviewed. Well, we'll correct that won't we? New Jango is based on the video game, which means it's a little different in a lot of ways. There's also some new tooling, which is important, as well as hooks which hint at upcoming accessories. It's worth noting he still has his dented helmet - as seen on Geonosis - as Hasbro didn't retool it (or notice the detail) from the costume before the duel with Obi-Wan Kenobi on Kamino. 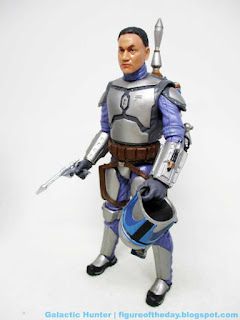 With 29 points of articulation - not all of which add to the figure's range of motion - it's a gem. Bend-and-swivel wrists, smooth joints, an extra bicep swivel, rocker ankles, and just about anything you could reasonably consider from a mold a few years ago can be found here. He stands just fine, and the legs can swing forward far better than most 3 3/4-inch figures with holsters - it just works. Not perfectly, mind you, but it gets a great range of motion given the rubbery plastic in the way of the joints. 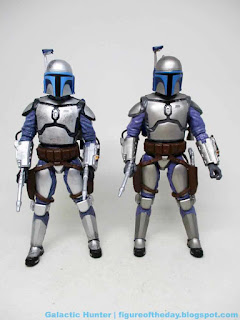 The helmet is the same as the previous release, with a slightly less shiny finish and the two stripes circling the helmet still missing. They didn't have them before, and they don't have it now - it's a shame, this was on most of the other Hasbro figures over the years. The blasters are similar, but the grips are a slightly different color. The backpack is completely new - there are holes in the bottom for flames, were any flames made, and I assume the design means those are coming later. It wouldn't surprise me to see this backpack used for a Boba Fett in the future, but it is a new tool - you can see there are some elements changed or missing when compared to Boba Fett's. 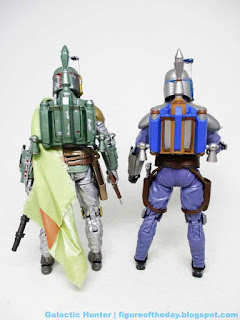 The figure's deco has been improved, with one exception. Sure, it's cleaner. Yes, it uses the purple body suit - which is probably closer to the game and movie. And yes, the Temura Morrison face has been improved significantly with far, far better eyebrows - but he's a bit glossier than the last one. Despite not necessarily being more authentic to the film, this figure does seem to be a better looking figure overall - the colors are nicer, it's a little less ambitious, and you get a better (but not perfect) head under the helmet. Also it's theoretically cheaper, but I assume that will come to an end as soon as this figure sells out. Get it while you can!