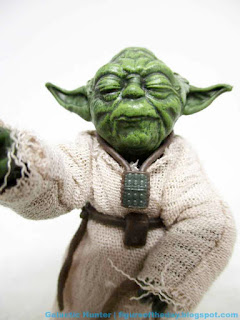 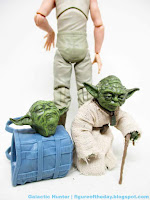 Commentary: This Yoda (Dagobah) is good, but it's not worth $20. The only corner Hasbro cut was foot peg holes, but part of the problem with multiple scales is you can see where we're being overcharged a bit - this is a super-articulated figure with an extra head, and it's 2 1/2-inches tall. Hasbro has a 3 3/4-inch assortment with super-articulated figures and similar quality for $12.99. $29.99 might have been too cheap for this set... but c'mon. This isn't a full $20 figure here. 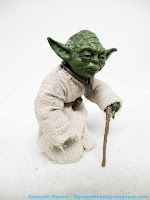 Shorter than the previous Yoda (which had a snake and a lightsaber, this figure seems to be the full super-articulated ridiculousness. Knee joints, ankle joints, wrist joints, and two of the best head sculpts Yoda ever got make this a good figure. I can't deny that you look at it and it's impressive - but it's tiny, man. You got more stuff with Maz Kanata. 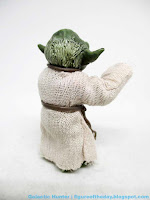 The tattered robes are pretty good, and the articulation works fairly well. I can't get a ton of great poses out of him - his body language seems more like the kid in the Yoda costume in E.T. - but he's ideally suited to fit in the blue backpack. Yoda slides right in, no fuss no muss, and in there you have no worries about making him look old, or sore, or hunched over. 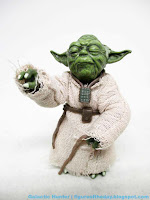 As silly as it is to note, Yoda's hair looks great here, as do his eyes. The wrinkles all seem perfect, too. I am unsure if the green is the right shade - it seems too dark - but it still looks decent. He's the right height, he's just too freaking expensive for what you get. A 2-pack with R2-D2 for $30 would have been right on the money... but as it is, it's good, and the Luke he comes with is very good, so I won't talk you out of picking up the set. You can probably get bigger, better, or other Yoda figures, but for this particular line there's no better example of the Jedi master from this movie yet. Having said that, you still want the other one for the snake!