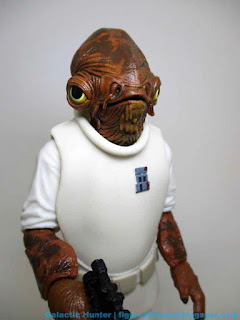 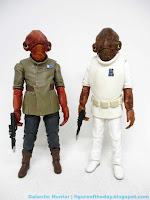 Commentary: When Admiral Ackbar was done in his The Last Jedi uniform, fans asked "So... are we going to get the original costume?" For a while it seemed unlikely as the Toys R Us exclusive 2-pack version sat and got marked down, with fans getting the double pack for less than the price of a single figure. But time changes thing - a 4-pack of Clones was $100, and then less than $100, and is now over $500. Things are crazy, and fans are still crazy for the classics. A meme since the dawn of the popularized internet, this figure means different things to different people. To some, it's a million "It's a trap!" jokes. To me, he was one of my absolute favorite toys as a kid. I loved the design and I was crazy about seeing him come to life in the TV special Classic Creatures: Return of the Jedi when I was growing up. 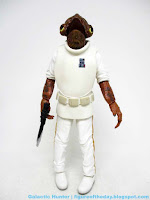 To kick things off... it's OK. I don't love the engineering of the legs. The figure absolutely has almost all of the elements you could want, but they don't all come together nicely. While the Stormtrooper from this wave is effectively perfect - and would've sold fine had they reissued the old one - Admiral Ackbar has a few snags. While there is a magnificent sculpt here, the carving-up of said sculpt is where the problems come in. And you might not even notice them - these are just things that irk me. 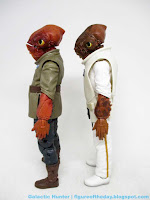 But let's start with the good. For starters, the alien skin. The colors are much darker than The Last Jedi release, but they're also seemingly exactly the same sculpt as that previous figure. The mouth opens, the left hand can grip a blaster, and everything seems to be exactly the same in terms of texture and wrinkles. I can't say if they were squirted out of the same molds or not, but it wouldn't surprise me - they certainly look and behave similarly. You can open his mouth, bend his wrists, and the elbows have a good range of motion. I don't have any issue with cutting corners where it makes sense... and it makes sense. The skin is mottled differently and is truer to the 1983 film, but I have a hard time knowing if it's just a little bit closer or not. But I don't think anyone is going to pick this up and go "this is wrong," because it looks and feels right. 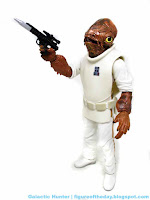 The uniform is similarly a perfect sculpt - the bib/vest is a little rubbery, just how it looks. The legs stand nicely, the arms can move well, and it behaves just like any other figure you may have bought recently with no visible pin joints on the body. The only thing it can't do is swing his legs forward, and that's because of the bib vest. Hasbro also added in those new double-shoulder joints so they can shrug forward and back, which is awesome. Wildly unnecessary, but awesome. The textures all look good, and if you leave the figure in the box you're going to love it. You can even pull it out and throw it on a shelf - it's going to fulfill your wildest expectations, if you're just going to look at it. 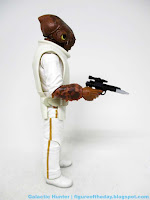 The nitpicks that bug me are all in the upper thigh region. If you look at it, there's a yellow stripe running down the leg. This has been on every Ackbar since 1983, but this is the first time it's been carved up into this larger quantity of pieces. If you align the yellow stripes on the side, Ackbar becomes pigeon-toed. He can stand, but he looks goofy - this isn't the kind of thing we should see on a figure in 2020 when it's based on a movie from decades ago. You can rotate the legs out a bit so the feet look normal, but then the pant legs look weird. Depending on the angle of the figure on your shelf, this may not bug you at all. Since Admiral Ackbar was probably my favorite alien from this movie as a child, I'm easily vexed.

While Ackbar is missing his Kenner staff, he's pretty much everything else you would want out of this figure with bend-and-twist knees featuring an incredible range of movement, rocker ankles, and the aforementioned additional shoulder movement. There's even a good waist joint in there but you won't get much out of it since it's blocked by the vest. The paint is mostly good - mine had a lot of weird scrapes, some more visible than others - plus a lot of excess plastic over some of the joints near the white plastic. It's not bad - but you might want to examine the figure prior to picking which one you'll buy to open.

Next stop, I hope: Max Rebo!

Email ThisBlogThis!Share to TwitterShare to FacebookShare to Pinterest
Labels: Admiral Ackbar, Rebellion, Return of the Jedi, The Black Series 6-Inch