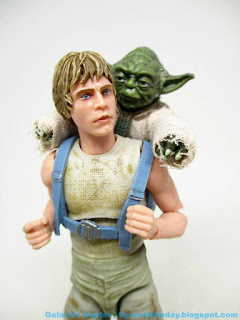 LUKE SKYWALKER (Dagobah)
The Black Series 40th Anniversary 6-Inch Figure or Deluxe 2-Pack with Yoda
Item No.: Asst. E7549 No. E8084 or No. E9642 for the 2-pack
Manufacturer: Hasbro
Number: #n/a or D4
Includes: Lightsaber, blaster on the single figure, add spare hands and Yoda and a backpack plus a cane for the 2-pack
Action Feature: n/a
Retail: $19.99 or $39.99
Availability: August 2020
Appearances: The Empire Strikes Back

Bio: Commemorate the 40h Anniversary of The Empire Strikes Back with Luke Skywalker & Yoda figures. At the urging of Obi-Wan, Yoda agreed to instruct Luke, developing his Jedi abilities. (Taken from the 2-pack box.) 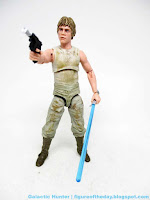 Commentary: This Luke Skywalker (Dagobah) is a gem. I'm not crazy about how it was priced versus what you get in the boxes, but there are two versions so you can pick. Why you wouldn't buy Yoda 2-pack to open and 40th to keep carded, I don't know. Interestingly, both flavors come in Kenner-infused packaging - the single Luke is on a 1980-style package for a figure that didn't exist back then. It also shows Yoda and the backpack, which are not included. Those accessories do come in the $40 boxed set, along with alternate hands. If you can only afford one... get the 2-pack. Also get the 2-pack for friends, they'll thank you, it's a marvelous if somewhat incomplete gift. The Luke figure itself may well be the culmination of everything Hasbro has learned since the 2013 introduction of the format. The pinned joints are gone, instead getting those inset 3 3/4-inch style joints in all the limbs with the improved range of motion we started getting in 2017 and 2018. Luke's arms and legs can really bend well - not "double jointed" well, but closer to 135 degrees, which is a vast improvement from 90 degrees (or less) that we usually see. The knees have similar movement, with rocker ankles. Wrists bend and swivel, and pop out to be replaced with a one-hand headstand hand or a "using the Force" hand. It's good to have options - and variations on these previously existed with some of the 3 3/4-inch figures. 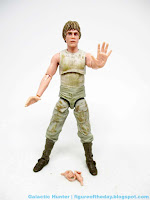 Luke's backpack fits like a glove - and fits Yoda like a glove - while not hindering his center of gravity. I've reviewed thousands of figures, and Hasbro has struggled to make figures that can just stand up with a good sense of balance - usually 6-inch ones topple over on my desk. Luke has stood upright, with or without Yoda, for days. I don't know if the boots are just a bit wider or if someone went out of their way to make this perfect, but it works. I remember Hasbro saying it could do the 1-hand headstand, but I wasn't able to make it work. A two-hand headstand would be cool too, but the set lacks a Dagobah base (which should've been included, honestly) or a second "headstand" hand to make it work. He would need the added support to do this for more than a few moments. 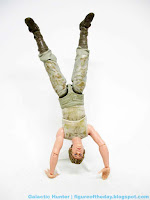 The likeness on Luke is pretty good - for whatever reason, Mark Hamill looked a lot like Iggy Pop around the same time. The hair is short and sweaty, he's a little gaunt and pouty, and probably is also on his way to Kill City with James Williamson. It doesn't quite match the new heads Hasbro put out for the other Lukes, but it's good in its own right. It's a good head - and from certain angles is eerily like the actor. I assume if they gave the face deco another shot it'd be perfect, but as it is, it's good. Maybe the lips are a little dark, but the sculpt is there, and they did a good job giving him good bones and excellent texture throughout. 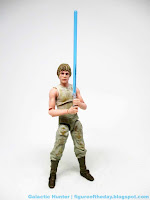 The default hands can grip the backpack strips or the blaster or lightsaber. Thanks to the range of movement, you can get some great poses out of Luke - but it's not like he used those accessories much in this costume. The spare hands are the real gems, adding a ton of personality to the figure in your displays.

Between Snowspeeder Luke, Dagobah Luke, and the various Luke reissues, you've got a lot of options this year - but at press time this one is the most impressive. He can stand easily, sit in other 6-inch scale vehicles, and look good doing it. If Hasbro remakes Bespin Luke I hope they take a few notes from this guy, it's a great example of how far we've come in a few years.