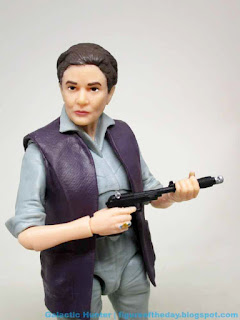 Bio:  Despite all t hat she has endured and lost in a lifetime of war, General Leia Organa continues to shine as a beacon of hope for the loyal soldiers of the Resistance under her command.  (Taken from Hasbro's packaging.) 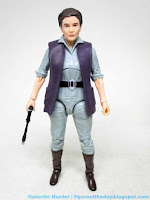 Commentary: Why yes it did take me 3 years to open General Leia Organa - and she's great!  For whatever reason, despite this being the main outfit of one of the three most important and merchandisable characters in the new movie, Hasbro/Lucasfilm/etc. decided to drag their feet on making new Luke and Leia sequel series toys.  For two years.  Despite this being the reason people went to see the movie and what they expected out of the original Force Friday.   I'd say this is a pretty good microcosm of how the relaunch went - sometimes it was good, sometimes it was weird, and there are a lot of "what exactly are you doing and why" moments.   But we got some good stuff!  And this Leia is certainly good stuff. 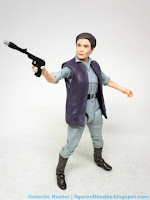 The 6-inch scale figure has the blue Rebel Fleet Trooper-esque suit and a purple vest, with a blaster that looks like her original one.  The boots are great.  The sculpted detail is excellent, with mostly the very best articulation.  This figure was made during Hasbro's bizarre era of putting torso joints on the chest, rather than hiding them in the belt - I would seriously love to know whose idea this was because it makes the figure look less than great while not necessarily improving the range of movement.  But it's not all bad!  The elbows have a pretty deep bend, and they blend in perfectly with her rolled-up sleeves.  The hands hold the blaster just fine.  Her hip joints are some of the very best, allowing her legs to swing forward just as well as your old 3 3/4-inch Kenner figures.

For a 2017 figure, the likeness is great.  I bet Hasbro could rerelease her with better deco - the face printing and skin tones have improved significantly lately - but this original release is good.  The flesh looks human, which is important, as the General is of that species.  The painted eyes and eyebrows look great, much less exaggerated than on her 3 3/4-inch sequel-era figures.  You can see that her face has a few signs of age - but it's flattering.  A tiny bit sunken in spots, but generally bright-eyed and smooth.  It's an idealized Carrie Fisher in toy form. 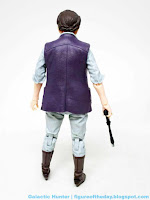 If you said to me to describe my perfect ideal of a Leia action figure in 2017, this would be it.  Unhindered articulation, better than average deco, a painted blaster, and excellent molding make this a figure you should go back and buy, unless they announce a better painted reissue.   As we enter a new era where the Disney sequel trilogy seems to be quietly buried under the rug, at least as far as merchandise goes, it's worth noting that there were great, older versions of the classic heroes that are absolutely worth buying. This Leia is one of those.   I would have loved a holster for her blaster, but it's not like her hands don't work.   Get her before she gets expensive when people realize just how nice this one is!