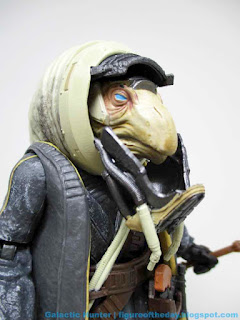 Bio:  Moloch wallows in authority over the lesser thieves of his gang.  Like all White Worms, Moloch is very sensitive to natural light and must wear special protective gear when outside his dank lair.   (Taken from Hasbro's packaging.) 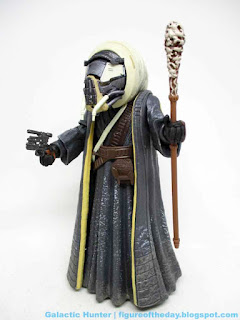 Commentary: I sat on Moloch for about two years.  It's been on a shelf that I could see whenever I turned my head for two years.  I really liked the movie, and the 3 3/4-inch figure, but for whatever reason I just let this one sit around.  Target also hung on to this figure far, far past its expiration date.  The good news is that means you can get it cheap if you want one - and you probably should.  It's a good figure for $20, but for $30 there's not a lot to plus him up. 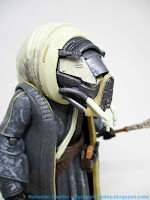 While the figure's accessory count is great and the paint applications are marvelous, the figure itself is a glorified salt shaker.   From the waist on up, it's the best thing you can ever want - the arm joints are nice and smooth. The mask pops off and you can make the worm head inside look up and down and to the sides, plus it's gorgeous.  The Solo aliens are extra-Star Wars-y compared to a lot of the other Disney-era films, and this one has Henson-ian hints with a design that doesn't seem entirely removed from The Dark Crystal.   You can pull off his visor and pull down his mask.  The blaster fits in the holster.  And of course, he can hold the staff.  Everything looks good, is painted well, and moves nicely. 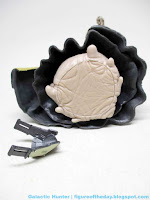 Unfortunately due to his robes and the design being a worm man, there's nothing going on below the waist.  I love the wormy detail with the little legs visible when you flip it over, but it doesn't feel as robust as Grievous or the Gamorrean Guard figures.   The good news is that it stands perfectly because it's basically a statue with articulation on the arms and neck.  This is also the bad news.  With a good sense of heft and really good detail on the alien head, it's hard to knock this one too much.  Other than, you know, not being something people seemed to want.

I assume we got "Moloch" because the name sounded like Indiana Jones' nemesis "Belloq," but I didn't write the script.  As the only Grindalid we got - and are likely to get - I'd say it's worth your while.  He fits right in with Jabba the Hutt, who is lacking in henchmen.  Moloch is good diorama filler and a high-quality design, so unless you  just hate him, you should probably buy one.   I wish we got Solo sequels so we could see him again.


Collector's Notes: I got mine from Target.