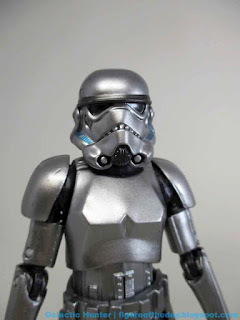 Bio:  Stormtroopers are elite shock troopers fanatically loyal to the Empire and impossible to sway from the Imperial cause.  (Taken from Hasbro's packaging.) 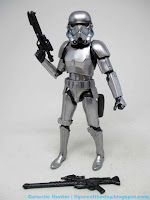 Commentary: When I heard that a  Stormtrooper (Carbonized Graphite) was coming, I was picturing something like Walmart's exclusive and forgotten Sith Jet Trooper. (Admit it, you forgot it existed - it's the only Carbonized figure to be marked down.)   Hasbro rarely made new colored Stormtroopers that have no precedent in fiction, but this silver trooper is a surprisingly good one.  It's shiny, but not mirrored.   It seems to owe more to the likes of Captain Phasma figures than anything else, and it's a good fit - the helmet still has painted details thatm ake it look gorgeous.    The body glove is also painted, but the various dots on the belly armor were left silver on my sample and probably yours too.   Articulation is unchanged from the original release, but you're buying this for the generous slathering of paint.  You're also being charged $5 more for it. 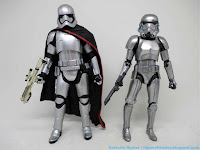 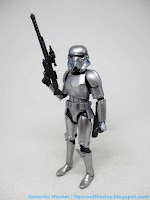 We got a lot of special Stormtroopers lately, from games like The Force Unleashed (two of them!) as well as troopers with battle damage, shadow troopers, and some lunatic even got the red Stormtrooper from an old issue of Topps' Star Wars Galaxy Collector Magazine made.  Can you imagine?  If you've enjoyed this figure in white, black, clear blue with glitter grey, and other colors, the silver one may be the best when it comes to bringing the detailing to life.  The white absorbs some of the painted detail, and while the red looks cool it doesn't do it any favors.  The gleam on the silver makes every belt segment pop, every button or dot leaps out, and even the pegs and vents sing in ways you don't normally see on this mold. 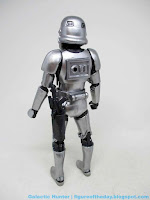 I generally don't care for quasi-commemorative figures, but this one sizzles.  It gives you a new perspective on a popular mold that's been repainted several times - and hopefully this is the last one, now that a new mold is on the way.  If you can get it for a fair price, do - the box is gorgeous.  It reminds me of an aluminum soda can, with a mirrored foil box and some simple-but-great Stormtrooper artwork on the back.