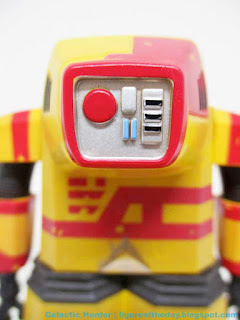 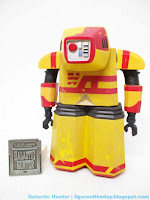 Commentary: As a kid, I loved Star Wars toys because of the variety in its selection of aliens and droids. Even though there were eight Ewoks, it never felt like overkill - compared to the last decade, where a lot of what we get is similar to what we already have. But sometimes we get something totally different, like B-R72. This entire figure's purpose is that it stands outside a theme park with four other droids, and now you can buy it. Is this good reason to make a figure? No. But is it cool and different? Oh yes. I like it, it seems like it could be something that hangs out with my Mini-Rigs or was off-camera on Ingo or something.

This loader droid can be dismantled - the head, uni-leg, and arms are all removable. The neck doesn't really move, and the legs are a single piece double-pegged into the torso. So really, all you can do is dismember it or pose its arms. Given my love of old-school Kenner figures, I'm OK with that - it's not like it could fit in a vehicle anyway with those most bellish of bell bottoms. The sculpting seems to match the prop quite nicely, mostly being smooth with minimal specialized surfaces other than some air conditioning ducs for arms and wrenches for hands. It's a gleefully weird mix of specialized parts and what seem to be found objects, with a head that mashes up inspirations from - unless I miss my guess - R2-D2 and Darth Vader's chest. From a fan perspective, it also seems to owe a lot to the G.I. Joe Cobra S.N.A.K.E. armor as well as Monsters Inc.'s own C.D.A. agents... with a hint of DHL's branding.

The 4-inch figure has a surprising amount of paint, which is true of the entire set - there's a light dusting of grit and grim that I don't necessarily think is obvious. You can see some spots where it's absent - and that really stands out - but on the whole it just looks like they used a darker yellow at first glance. I love the red stripes with worn-off spots, and they did a nice job with the weathering. Except on the face, they just skipped that spot entirely. It matches the photos of the prop quite nicely. 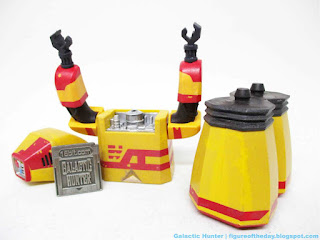 This is a neat toy that is one of those figures that both makes me cringe that it took a slot from another potential figure, but also delighted in that it's weird and exists only in a corner of the galaxy where collectors probably aren't paying attention, particularly over the last couple of years. My old-school droid loving self loves this, but my "but why not give me something I might recognize" self thinks it's a waste. That said, I'll take a weird robot over another R2-D2 redeco any day, and I assume we'll probably not see many more toys based on this design. If you see the set, get it.

The same model of Droid appeared on D'Qar in TFA named B-U4D. Both yellow, this one has a few more different red markings.