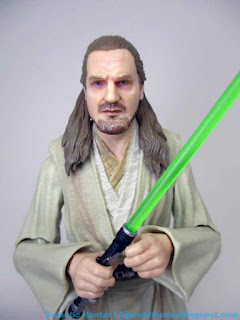 Bio: A wise and powerful Jedi Qui-Gon Jinn discovers young Anakin Skywalker, proving to be a pivotal event for the entire galaxy. (Taken from the packaging.) 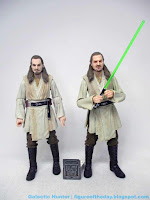 Commentary: The original release of Qui-Gon Jinn a few years ago was an evolutionary link in this line - Hasbro was trying to fix the issue of weirdly painted faces, so it tried making separately molded eyes. The 2021 release seems to town down that whole thing, giving us effectively the same exact figure with the fancy face paint. It looks a little more lively, but it might have too much color - the eyes almost look bloodshot, but everything else seems to be better. The skin tone is just a little lively, as opposed to the probably-just-died not-quite-bluish look for the original.

You're paying more for less, but it's an upgrade. Hasbro removed the second hand from the original, and charged you an extra $5. A cloth robe would have really made this feel like a good deal, but all you get is an (admittedly good) lightsaber that can pop apart and be placed on his belt. It's a good match for the 1999 Qui-Gon Jinn (Jedi Duel) figure from the first Midnight Madness, coming on a foil cardback that's pretty sturdy. 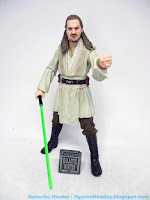 Qui-Gon's outfit is basically the same as the previous release. The color looks a little more saturated, but other than that, it's Qui-Gon. It's good - you may just be buying it for the packaging, but I opened it and I think it's clearly the superior version. I wish it cost the same as the basic figures because there's nothing special here, and Hasbro got a free second shot at selling existing tooling, but it's good enough that you'd want to buy it as part of this year of the celebration of a company that now exists as a spleen in the body of the mouse. I'm glad they gave him an upgrade, and I'm glad he can hold his lightsaber. Unless you're a completist or a packaging fiend, you may be better off keeping the $25 and putting it toward one of the many (many) new releases this year.

There are so many figures coming out I'm having a hard time deciding which way to go with picking up new figures. This is a great looking figure and I'm a fan of his character. I need one of these for the grandsons to play with so I'll keep in eye out. Good review and post.