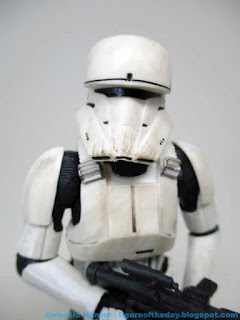 Bio: Imperial combat drivers operate the Empire's arsenal of armored repulsor vehicles. Combat drivers are lightly armored, relying instead on the thick skin of their vehicles to protect them in battle.. (Taken from the packaging.) 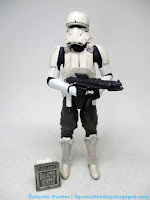 Commentary: Originally a Toys R Us exclusive in 2016, this, Imperial Hovertank Pilot has sat unopened for five years - I figured it was time to open it, since a reissue (with minimal changes) came out in 2021. We'll get to that one - let's focus on the red and black version first. It's good! It's also basically a Scarif trooper with new paint and a new head, making it a smart and good reuse of existing tooling. Hasbro reused parts like Lucasfilm reused parts, and that's the way it should be.

Hasbro did a good job here - this was a good choice for an exclusive at the time, making use of the amply reused parts from the big screen. The light off-white color of the armor matches the on-screen counterpart, with a little bit of dirt on the boots and pretty good scuffing and wear on the armor. For the pre-hyper-real-printing era, this is a nicely fake-battered figure. It looks sufficiently different from other troopers on the market, while recalling them in various ways. In other words, it fits in with the lower-budget 20th century movie look of the Galactic Empire.

Articulation was standard fare for the day - about 27 points. The range of motion was pretty good, although the elbows could only bend 90 degrees while the double-jointed knees moved nicely. The legs swing forward well, with knees that bend at a 90-degree angle. Had Hasbro any chance of making a vehicle for these guys, I'd be impressed - it's good to be prepared! But the 3 3/4-inch version was $80, so I assume an all-new 6-inch one would be scraping $200 given today's inflation. For this reason, this figure's chief role will be to sit in a box or stand at attention with other troopers on a shelf. Thankfully it can stand well, or be posed, or hold his blaster without a fuss. There's not going to be much else for it to do.

Especially at $20 for the new version, this is a good figure. Hasbro did a great job engineering a good body that can be reused time and again, they painted it well, the helmet was designed nicely, and there's nothing I can say negative about the figure itself. Its function, however, is to be collected - this isn't going to be played with, it's not going to be a child's favorite toy. It probably will never go on any adventures. It's not going to pilot any vehicles or be attacked in a playset. Its purpose was to be collected, which is one of the things I bristled at when writing about toys in the late 90s and early 00s - I love toys, but when it comes to things like statues, they're not as endearing. While this is by no means a statue - it's a super-articulated figure! - it (and indeed, many figures) serve little purpose other than to be bought, admired, and then I would wager set aside for a few years. I absolutely feel a little spoiled saying this, but in the last year it's something that certainly started eating at me. I've got so much stuff, I can't really play with it - and the 6-inch scale doesn't really lend itself to fun times anyway. It looks good on a desk or a shelf, though, so if you like what you see, rest assured, it is an excellent collectible.

If Hasbro ever makes a Retro Collection one - and I hope they do! - I'll buy it, and throw it in my AT-AT, and have a great time. This guy's fate is on some risers on a shelf after the review goes live.

Collector's Notes: I got mine from Toys R Us, a chain which ceased to be in 2018.

It is a good looking figure. I love the Black Series 6" figures. Budget restraints keep me to those I want the most but I now have young grandsons who really enjoy the action figures and play with them when they visit. So I constantly find myself buying figures for us to play with together. I still have my collection, of which I've shared some figures with the boys, but the majority either won't be opened or will be opened and displayed when I have the appropriate space to do it. Good post.