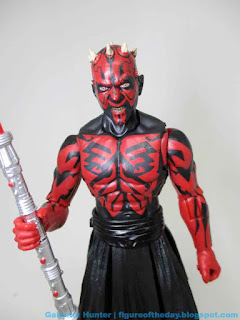 Bio: Darth Sidious' apprentice and enforcer Darth Maul has cut his way through the ranks of the galactic crime syndicate Black Sun to take on the pinnacle of their organization. (Taken from the packaging.) 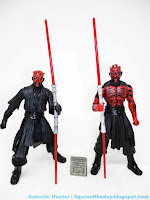 Commentary: Seemingly the most popular of the batch by far, Darth Maul (Sith Apprentice) is a figure that keeps getting revisited - Hasbro did a deluxe one for Power of the Jedi and a super-articulated one in its Evolutions packs. It sells! You can count on it. They should probably take the 3 3/4-inch one and slap it on a Vintage card. It'll sell. This 2021 release is nowhere near that simple - it shares a few parts with the 2013 figure, but so much of it is new!

This is one of those figures you could probably hand someone to get them started buying the line. They'd probably roll their eyes over topless Darth Maul, packaged in a quasi-hardcover book box - but the joints are incredible, the personality is strong, and the paint job is really good too. I'm not going to waste time nitpicking the body art design, because it's certainly good enough and the superior construction is worth praising until this one is one-upped some day. I would recommend buying this one, and buying extras as gifts for any collector-curious friends you may have. It's right up there with this year's Asajj Ventress as one of the very best. Do not miss it. Do not dawdle. Just go buy it if you can find it for a fair price. 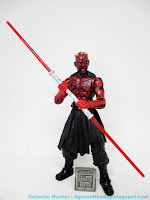 Hasbro used 2013 Maul's legs, but even those are retooled - unlike many other figures, they show new copyright information and new SKUs or other numbers stamped on them. They still feature the same double-jointed knees as the original, and are effectively the same parts. Despite the differences, they're functionally the same and you're not going to find a lot to fawn over here as being new. The Lightsaber is also reused, but painted silver - and it's tighter. At first I wasn't sure if it was glued together or not, but it is possible to split it apart. It's a very good accessory.

The rest of him is new - and I was surprised. I'd love to know if there are plans for those new parts, because shirtless Kylo Ren seems like a great exclusive even if it is kind of a gag idea. Hasbro's new Darth Maul torso has a great ab-crunch joint, the new-style arms with superior cuts in the elbows and the extra joints in the shoulders, and great hands that have zero problems gripping the lightsaber. It absolutely could be used and reused again on other releases, and you'd like it. It's just that good. The paint job may not be as exciting, as I have heard complaints that Darth Maul's hands (on the figure) lacked the ink he seems to sport in the comics. Given that his face's marks are never really consistent from figure to figure, I assume any comic or cartoon art is also subject to artistic interpretation so I don't poo-poo the figure for not being 100% perfect to the other interpretations. There's no movie for it to perfectly match, and 2D art tends to evolve over time. It may not be exactly what you want, but it's good enough. And it's selling well.

The "skirt" pieces are new, but seem to draw inspiration from the 2013 model. Everything is different, but there's still a hole to hang the lightsaber hilt. The cloth elements are gone, with the sides being more open and the front being covered by a hanging plastic piece. The folds are also different from the 2013 figure, so it doesn't look like they just altered an existing digital sculpt - they did a lot of work here.

Of course, the real work comes in the all-new head, with much-improved head spike deco, gritty teeth, more determined eyes, and more consistent coloring in his facial markings. I am not necessarily saying it's perfect - my sample had some red on the horns - but for the asking price, it's some of the very best Hasbro has ever given us. I love the angry face, the extra neck articulation is a real bonus too. These 6-inch figures usually have wonderful sculpts, but rarely a lot of personality. Darth Maul makes up from eight years of figures that are just trying to look their best on picture day with the most determined head the line has given us so far, and Hasbro deserves credit for giving us a figure that looks like he has something to say.

At this point I'm just a broken record, but I'd say it's worth your while to snap this one up before it goes off the market. It's a good figure and the kind of thing new fans will discover down the road and go "Dang, I wish I didn't miss that." Just go get one for $25 if you can find one for sale. Or buy two, so you have one to trade later. Someone who isn't you will be glad that you did.

A really good looking figure. I'd love to find one but we'll see. Good review.

I'm debating on whether to open this or not.