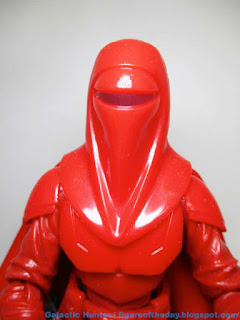 Bio: Training himself in the ways of the dark side of the Force, Carnor Jax became one of the most formidable members of the Imperial Guard. He betrayed this brotherhood by usurping the Imperial throne. (Taken from the packaging.) 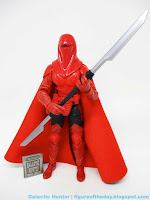 Commentary: There's a story behind Carnor Jax (Kir Kanos) which I hope gets told in full some day. With the name Carnor Jax appearing on all the documents, it was a surprise to see the revealed figure as Kir Kanos - both characters were opposing forces (and based on the art, either clones or non-distinctive faces) in the Dark Horse Crimson Empire comic book series. Presumably people doing approvals didn't have the full picture at any time - a lot of things are kept secret with code names, so someone probably saw the figure and said "Kir Kanos looks great!" and someone else saw the packaging copy and said "All of this is accurate information about Carnor Jax!" but minimal people with approval/veto power saw the assembled product. Is my guess. I have no idea, I just work here.

This figure is basically the same as the 2018 Royal Guard figure with a new cape and new deco. You have to appreciate Hasbro's foresight - I mean, it's smart to plan for this inevitability - by sculpting perfectly good Kir Kanos armor under the cloak of the Royal Guard so you can cash in on your tooling investment later. He has a swell Biker Scout pistol, a newly-tooled double-bladed staff, and a cape with surprisingly vibrant purple metallic lining. It's a little garish, but I like it - and it's unlikely to be seen in most poses anyway. 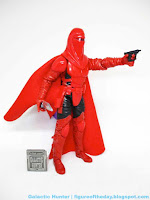 The articulation is good, but not perfect for a double-bladed staff weapon. It's good for 2018, at any rate, given its 90-degree bend elbows and rocker ankles. For fans of the old comic series, the red arms, black pants, and distinct deco on the legs will immediately remind you of the character in the comics. Sadly, the head doesn't really turn thanks to the wide base on the helmet and there's no head under the helmet. I'd have loved to see Solid Snake Kir Kanos' head under there just to give the toy a little more personality. But still, it's business - sometimes you make the best you can with the budget you have, and this definitely seems like a B+ figure in a D- box. In addition to the name and copy errors, the Dave Dorman artwork on the front of the box is decidedly low-resolution. Perhaps they just submitted the wrong package to the printers? Heck if I know.

For fans of weird errors - and Hasbro has had surprisingly few, given their thousands of releases - you'll want this. For comic fans, this is a must-buy. And for those like me who appreciate Hasbro actually making 6-inch figures of some of the more popular Expanded Universe characters of the 20th century, it's an absolute delight to see that what we feared - the complete shunning of an entire galaxy of characters - didn't come to pass. Seeing Kir Kanos along Jaxxon and the now-canon Thrawn, it's just a delight. Nothing is ever perfect, but this is a valiant effort in the context of a line of retools and repaints. If you can get it, get it. I would not anticipate a retool with an unmasked head unless someone decides to plus it up for a future convention exclusive.