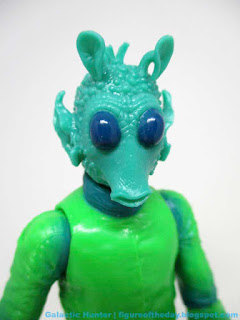 Bio: Greedo was a male Rodian bounty hunter who grew up on Tatooine in Mos Espa. He was occasionally hired by crime lord Jabba the Hutt for various mercenary jobs, including the capture of Han Solo, who killed the luckless Rodian. (Taken from Wookieepedia. Package has no bio.) 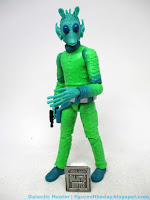 Commentary: Greedo-painted Greedo was a neat idea - but it's not perfect. Is anything? Hasbro took the 2013 The Black Series figure - took out the vest, and added some new paint. It's a decent update to the figure, which has been over $100 for a while - there's definitely demand for the green guy. (There wasn't for a long while, but new people coming in to a hobby can do that to a price.)

I would argue they should have gotten rid of the holster, given the original Kenner toy had no belt nor a holster of any kind. The colors of the 2021 redeco are pretty good - the eyes are bluish (rather than purple like the movie), the skin seems a little brighter, and the lime green outfit is close enough. The Black Series mold doesn't have knee-high boots like Kenner's figure did back in the day, but you do get the dark green paint around the wrists and elbows. Hasbro opted to leave out the painted white eye reflections of the Kenner original, which I was going to complain about - but the glossy finish on the eyes is so good, I think they made the right call. 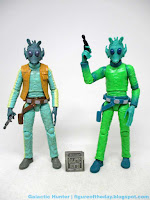 The articulation is just as good as it was last time, and the coloring makes me happy. If you're not a fan of a certain age you may not care, and that's OK. You don't have to buy this. I was really excited to see what a good job they did, even if the outfit of the Kenner figure isn't really replicated precisely. The colors are, though, mostly, and that's good enough. Greedo has no problems holding or holstering his blaster, so I'd say it's a nice Rodian to add to your toy stash regardless of your feelings on Kenner colors.

If you can find this figure at a fair price (or if Amazon reruns it) you should absolutely buy one. I love that they made the hips so he can sit, and he seems like the kind of figure that should be able to hang out with Jaxxon. Kenner's weird 1979 paint jobs were a hoot, and I am happy they brought them back for 2021.

For the vintage painted ones, is it possible to get a photo of them with the actual vintage figure? To see how well it matches up?