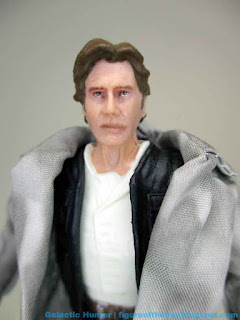 HAN SOLO (Endor, reissue of 2006 and 2011 releases)
The Vintage Collection 3 3/4-Inch Action Figure
Item No.: Asst. E7763 No. F1899
Manufacturer: Hasbro
Number: #62
Includes: Trenchcoat, blaster pistol
Action Feature: n/a
Retail: $12.99
Availability: May 2021
Appearances: Return of the Jedi
Bio: Han Solo and his strike team landed on the forest moon of Endor, where they encountered Scout Troopers and were captured by Ewoks. (Taken from marketing copy. There is no bio.) 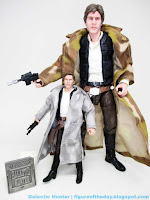 Hasbro told fans that the reason they were rerunning older figures for The Vintage Collection were to bring us back very expensive figures to make them affordable, and to bring back the very best because there's not a heck of a lot of room for improvement. This does not explain Han Solo (Endor), a figure that was, let's be generous, pretty good for 2006 [FOTD #410] but pretty bad in 2011 and downright awful in 2021. Back in 2006, we were only 2 years into super-articulated figures being something of a normal happening and Hasbro was still struggling with making a really good Harrison Ford face. (Heck, they still are.) The figure's proportions are a little strange with oddly-posed legs hidden by a big cloth coat. The head was fine before when unpainted, but with the added photoreal deco looks something like a blobfish removed from the pressures of the deep. The face looks like it's melting. It's not good. Hasbro was seemingly aware of this from the official photography, which tends to show the figure at very specific angles which flatter the sculpt and hide the flaws - I mean, that's what you're supposed to do. The product photographers at Hasbro are absolute artists, because you probably had no idea just how bad this figure looks until you got it in your hands. 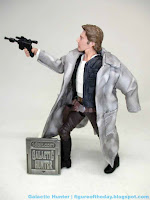 Hasbro shouldn't have brought this one back, and I would assume there may have been better alternatives - like adding a holster to TVC136 Han Solo in Carbonite, and seeing how the photoreal paint worked on that may have proven a cost-effective solution that didn't make you look at the figure with pity. It's also worth noting this figure doesn't have a silver muzzle on the blaster, but the 2006 release does. I applaud Hasbro for trying, but this should've been axed before it left the production stage. I'm sure it may scratch some itches for fans wanting to fill up their Kenner collections, but the genuine article - a real Kenner figure from 1984 - is around $54, and the superior figure (but inferior coat) from the 2006 release sells on eBay for as little as $13. I'm not telling you anything you don't know here - this is just a bad reissue of a figure that didn't age well.

The main reason to buy this figure is for the coat. You can apply it to another Han figure you like better, because it does look pretty good. It's a little bulky - it's impossible to perfectly scale down real-life fabrics to fit these guys - so it doesn't hang perfectly. Sculpted plastic tends to look better at this size, but Hasbro's artisans picked a good fabric that mimics the unique fabric pattern from the film quite nicely. The stitching is also downplayed, not looking as obvious as on the previous releases. This feels like where the budget for the figure went, and Hasbro has been consistently good about improving its patterns and fabrics at this size. Whoever did this, my I tip my hat to you - you did great. 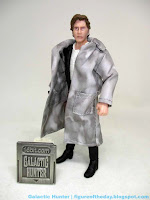 I assume the figure deco artist did their very best too, but sometimes you can't polish Bantha poodoo. The head is the same as the 2006 and 2011 releases, which wasn't great - but in its unpainted flesh-colored state, it looked acceptable at best. I didn't have a reason to dunk on it because it's not like they did anything to draw attention to the lips. For the 2021 release Hasbro used its fancy paint printing to give us more lifelike eyes - and I like those! - and a melty smile. It's not unique to my figure, and it seems to be a result of the printing aligning with the existing sculpt - every sample I've seen looked bad, and I don't think any level of paint could make it look better. I was surprised, though, to see it could make it worse. At certain angles it does look pretty good - but deviate from that position, and you lose it.

I totally agree!! We got completely new head sculpts (as far as I can tell) and photo-real printing for the new Luke and Leia Endor figures, and I LOVE those figures, but no new head for this Han. And you're right that this figure's hips/legs are weird. Even when first released years ago, I noticed his hips were too small, and the torso also looks too large in circumference, especially if you try taking the vest off. I know it's probably unlikely, but I really hope Hasbro gives us a completely new Endor Han in the not-too-distant future, because pretty much every all-new TVC figure for the past 2 or 3 years has been amazing. I'd even be happy with an all-new Endor Han without his trenchcoat if that's what it took to be cost-effective with an all-new sculpt. Thankfully I found a few with pretty good photo-real paint apps, but most of the ones I saw in stores were terrible. The new Han head sculpt used with the Han (Stormtrooper) TVC figure is the best 3.75" scale Han head EVER, and I'm not sure why they don't just adapt that one for all Han figures now if they don't want to keep sculpting new ones. That Han head would have made the Han in Carbonite TVC re-release so much better as well. Oh, if only I was in charge of Hasbro Star Wars...

This head was sculpted for the 2008 Shield Generator Assault battle pack. It’s old, but it’s not the same as the 2006 figure.