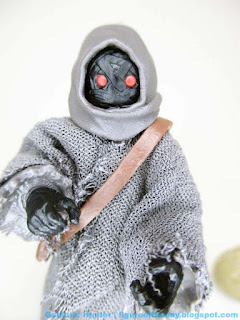 OFFWORLD JAWA (Arvala-7)
The Vintage Collection 3 3/4-Inch Action Figure
Item No.: Asst. E7763 No. F1894
Manufacturer: Hasbro
Number: #203
Includes: 3 blasters, the egg
Action Feature: n/
Retail: $13.99
Availability: July 2021
Appearances: The Mandalorian
Bio: The Offworld Jawas found on Nevarro and Arvala-7 may look different than their Tatooine counterparts, having adapted to their new surroundings, but their obsessive need for technology still drives them. (Taken from marketing copy. There is no bio.) 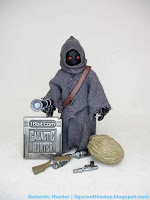 Commentary: Sometimes you get a figure because you love it, and sometimes it's because it's a good deal. This Offworld Jawa (Arvala-7) is not a good deal. This doesn't mean it isn't neat in and of itself, but the 2021 figure is just one Jawa - and in The Black Series line, you got two Jawas [FOTD #2,169] for $13. While this one does have a new head and new accessories, it is not a good deal. The only reason you get extra blasters here is because you're getting all the weapons from that 2-pack, but with 1 less figure.

It's a bit of a tightrope to discuss a figure like this. Is it good? Sure. Bit since it reuses old parts from a 2-pack - the figure has only 12 points of articulation, with no knees or ankles - it's sort of a bummer. A completely newly-tooled cyborg Darth Maul or post-Jedi Ahsoka Tano is taller, with nearly twice the articulation, and costs the same - don't do any mental somersaults here, it's just a bad deal and it'll sell because it's on a Vintage cardback. It also looks marvelous - the figure has a new bandolier, a new hooded head, and a cloth robe that makes it look like a new figure. It probably wouldn't even occur to you to think it's old parts until you compare it to older figures, or check the copyright marks on the feet.

This figure has beady red eyes that don't glow in the dark, but do react nicely to black light. The color sings nicely! The coloring looks just like what we saw on the costumes of the aliens Mando gunned down on the show - a surprisingly harsh sentence for parts thieves - and shows Hasbro's parts reuse philosophy. With a new head and cloth robes, plus a swell Mudhorn egg - it certainly looks new enough. And it's an army builder to boot! (The Chieftan will ship with the Razor Crest vehicle early next year.) The figure has no problems using the blasters, which should make it easy to build out a tribe if you get multiple Jawas later. The blasters are nicely painted, and the egg is sculpted to look somewhat hairy. They clearly didn't take any shortcuts here beyond the body of the figure - they dressed it up nicely.

Given recent price increases - and precedent - it's hard to justify army-building this guy. But he looks great, the robe is one of Hasbro's better efforts, the bandolier is great, and I wish I had a dozen more just like him. I just can't justify $14 army builders, but if this were a 2-pack I would have bought every last one I saw. I'll probably wind up with a chief and two random guys - which is good enough for now, I suppose. I like it. I'm glad Hasbro opted to not keep the egg exclusive to HasLab, and I assume this is going to be a popular figure down the road. If you can stomach the price, it's worth it. And if you don't open your figures, it's absolutely worth the money.

Not a fan of Jawa figures, but I'll buy almost anything on a Mandalorian card. I might get another one, as this is the apparent peg warmer of the wave.