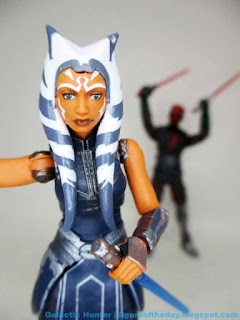 Bio: On Mandalore, Ahsoka Tano faced Darth Maul, clashing Lightsabers in the throne room of the capital city. Ultimately, she was able to turn his own weapon against him. (Taken from marketing copy. There is no bio.) 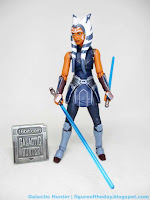 Commentary: Sometimes good things come to those who wait. While The Black Series figure was partially recycled parts, this 3 3/4-inch scale The Vintage Collection Ahsoka Tano (Mandalore) is new parts. This matters - so many of Hasbro's releases in The Vintage Collection have been something of a snooze since the 2018 revival, with almost no new classic characters and a whole bunch of rereleases. Themed waves are scarce, which makes collecting something of a chore - if you can't buy figures that go together nicely, it's just clutter - it's not a collection. Thankfully this wave pairs Ahsoka with a matching Darth Maul, and while I would like some other figures to go with them, at least we got a Rex reissue a couple of waves back. This is one of the better waves that isn't The Mandalorian figures, as she shipped with an Offworld Jawa and king of dad jokes Echo, too. Hopefully this wave gets wide release - I assume Jawas will be snapped up by army builders and the rest will just plain sell.

The first Vintage Ahsoka - who needs another rerelease - was put out almost ten years ago, and she's been consistently popular as soon as the old fans started leaving and the kids grew up who loved her as a kid. That's the point of Star Wars - you kind of have to grow into it. This figure is a marvel of Hasbro engineering, she's been open on my desk for a couple of days and she hasn't fallen over. That's a huge deal - most humans will eventually flop over and she's had no problems standing up thanks to her massive 25 points of articulation. In my day, we had four or five. An excellent figure in the early '00s had 22, but some come and go - Ahsoka has no bend-and-swivel wrists, but you do get a thigh cut as well as double-jointed hips. Also a bending knee joint as well as a swiveling joint. I gripe a lot about $14 reissues, but the $14 new figures have been generally superb - the engineering works great, she can stand, she's easy to get action poses from, and she looks ridiculously good. The waist has a lot of good movement in it, and the double-jointed neck gives you a lot of extra personality too. 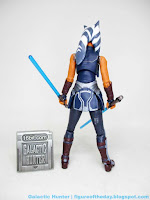 Her costume is wonderful with dark grey and silver trim. It makes sense given the tone of the show - she's gone from a colorful child to a drab adult with the encroaching Empire. Her lekku are nicely painted, her eyes are glossy, and her lips - to human eyes - are perfect. Her hands and wrists have painted armor and gloves, it's difficult to fault this one. She's great - the stock photos looked so good, I couldn't believe them. The final figure is about that good, too. There's a reason people are overpaying for her right now. (Be patient, more are coming.)

Her blue bladed lightsabers are based on the ones Anakin hands her near the series' final episodes, and again they're great. They look good, the colors are nice, and it's the kind of figure that should make you mad because it shows just how amazing Hasbro of 2021 is. So many of the figures we've been reviewing here are based on engineering from 2010-2013, it's just such a drag. Ten years is a long time in toys - in 1985 Kenner made Duloks, and in 1995 they made ultra-buff Luke and Han and Darth Vader. Goofy, yes, but with much better painting and sculpting - this figure is really good stuff.

We've only had about 10 figures this year that I could remotely call "new," and at least two of those look like they're using some old bits. (Bespin Escpae Leia just mostly looks like an older figure.) There's painfully little new to buy in a sea of Carbonized and Credit Collection repaints, so figures like this ex-Jedi Ahsoka are a real treasure. Get one.